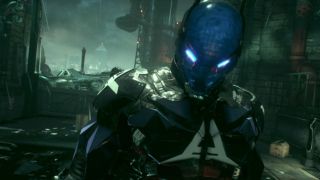 If you’ve seen Ready Player One you might (just a guess here) have noticed that the movie is full to the brim with Easter eggs, winks, nods and more references than we all knew what to do with. Except, there was one everyone missed – until now. The Arkham Knight, from the Rocksteady game of the same name, was actually glimpsed in a scene thanks to the magic of the home release and a very observant fan.

Trust Reddit to find this one. As Parzival makes his way through the Anorak archives, in which many of the world’s secrets are kept, the camera pans towards the entrance and, as casual as you like, there’s the Arkham Knight leaving the scene.

Not only is it ridiculously cool to see Batman: Arkham Knight be repped in the movie it’s also – spoilers here for the game if you haven’t played it – the first time Jason Todd has been on the big screen in any way, shape, or form. Which is kinda insane when you think about it, as he’s been a Batman mainstay for the better part of two decades.

If nothing else, the absolute chutzpah of Steven Spielberg and company to include an Easter egg to one of Batman’s newest villains, not show it off at all and only to have it found months later in a blink-and-you’ll-miss-it moment, is testament to Ready Player One’s mass appeal and incredible rewatchability. This is a movie you’ll be coming back to again and again to find things you missed the first, third, or even fifth time around.

What was your favourite Ready Player One Easter egg? Let us know in the comments!