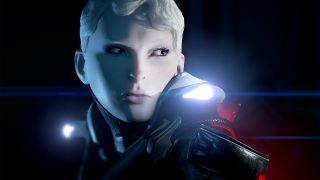 Who knew: save for all that stuff about drunken arguments, Lit's "My Own Worst Enemy" makes for an amazing stealth game premise. For proof, look no further than Echo, a sleek sci-fi stealth adventure that revolves around doppelganger enemies who study - and mimic - your every move. Echo's central mechanic, where your actions effectively teach the AI how to kill you, feels particularly clever in a time when machine learning is becoming increasingly (and somewhat frighteningly) prevalent. The strikingly ornate aesthetic and third-person action surrounding that ingenious core idea are equally brilliant.

Once you know the developer's previous work, the highly polished stealth trappings make perfect sense: Danish indie team Ultra Ultra is made up of ex-IO Interactive developers, whose resumes include the recent Hitman sequels and the Kane & Lynch series. "During my time at IO, I was always pitching fantastical things, and they do gritty realism," says Martin Emborg, co-founder and CEO of Ultra Ultra. With Echo, Emborg and his team are light-years away from the modern-day assassinations of the Hitman series. The cautious sneaking, silent takedowns, and precision sidearm shots of Echo all take place within the Palace, a mysterious, facility that resembles an infinitely giant mansion inspired by that haunting room from the finale of 2001: A Space Odyssey.

You can't see me

Test your sneaking and guard-outsmarting skills with our list of the best stealth games.

You play as a spacesuit-clad woman named En - voiced by Rose Leslie, best known as Ygritte from Game of Thrones - who's come to the Palace in the hopes of a miracle. En carries a glowing red cube containing the essence of a man she hopes to revive using the Palace's supremely advanced technology. Unfortunately, the procedure backfires, and the Palace instead produces droves of Echoes: atomic-level copies of En all fixated on terminating the original article. "It isn't like an evil Palace or anything," explains Emborg. "The cube is the only thing the Palace can't copy." Your emotionless clones don't harbor any ill will towards their progenitor, despite their constant attempts to wordlessly, unblinkingly strangle you - they simply wish to become the perfect duplicate, and they need En's cube to do so.

Do as I do

The Palace itself is something of an omnipotent observer, constantly monitoring your every move and feeding that information into the Echoes. Each time you perform a new action, you'll see a glassy silhouette form at your location; this illustrates the fact that, like it or not, you've just taught the Echoes how to do something new. The range of behaviors the Palace can learn by studying you is staggering, from the obvious - hiding, sprinting, vaulting, opening doors - to the less-so, like wading through water, eating grapes from fancy food stations, or even picking up the keys you need to proceed (at which point, you may need to take them back by force).

But the Echoes' mimicry has its limits, and they can only learn in waves and cycles. Once you've triggered enough recorded actions, the Palace experiences a tense blackout; afterwards, the Echoes are reprogrammed with all the moves you've shown them. These blackouts aren't on a set timer, either - they're only triggered when the Palace thinks it's time for an update. "The blackout happens because of your actions, so if you [just stand still and] don't do anything, nothing would happen," says Emborg. If you play all-out stealth, the Echoes will stalk you like prey after the next blackout. If you're shooting everything that moves, prepare to dodge a lot incoming fire during the next cycle. "They're all revived when the blackout is over, so killing is not really a viable solution for anything," says Emborg, offering advice that's just as prudent in-game as out. The constant shifts in enemy intelligence force you to think ahead - not just how you're playing in the moment, but how you'll respond to and outmaneuver your own playstyle when it's turned against you a short time later.

It's such a smart mechanic, and vaguely reminds me of the Cosmic Clones from a few levels in Super Mario Galaxy 2, albeit far more interesting. Rather than a procession of afterimages who perfectly replicate your every move, only forcing you to avoid your previous path, the tendencies of Echo's Echoes are molded and remolded time and again as you explore more of the Palace. That kind of replayability typically lends itself to procedurally generated experiences designed for repeat playthroughs - but as someone who's sick to death of the trend towards procedural malleability, I'm delighted when Emborg tells me that the Palace was all made by hand. "The levels are built very carefully. We discussed it at the beginning, because it would be an obvious thing to have a procedurally generated Palace," says Emborg. "The reason that it isn't is that we need to present you with quite deliberate choices, in order to make the behavior instrumental in the later parts of the level. Procedural would be too random, or too difficult."

I'm also dazzled by Echo's pristinely clean HUD: En is encircled by a globe of blue light, and an enemy's proximity is represented by pulses of light that turn from blue to red as the threat approaches. If you're spotted, a distinct noise lets you know it's time to book it. The mix of clear visual messaging and audio cues gives the player a keen sort of Spidey Sense that's often missing from third-person stealth. "It was very important for us to keep it as clean as possible - we wanted it to be very player-facing but without being cluttered with information of every kind," says Emborg. "So we put as much as we could into the sound. Whenever you hear a taiko drum, that's someone discovering you. And you can hear in the music when the blackout is coming."

Immersive stealth games in the vein of Hitman often have the good nature to let the player have some silly fun if they so choose, where inventive solutions can either miraculously succeed or spectacularly fail. And Echo's clones mimicking your actions creates the potential for some very goofy, surprisingly eerie monkey-see, monkey-do situations. For instance, if you make En constantly throw out whispers or shouts - her version of Solid Snake's wall-tapping diversion - the Echoes will be shouting up a storm after the next blackout. If you always take the time to eat any available grapes in your vicinity, your clones might sometimes take a break from murderously pursuing you to grab a quick, nutritious bite.

There are limits, though; for instance, the anecdote we heard at PAX last year about a player who tried to make all the Echoes constantly walk backwards didn't make the cut. Similarly, you can't start crouching and uncrouching incessantly to create an army of teabagging Echoes. "When we came back from PAX, we were determined to implement a lot of what you would probably label as 'silly' behavior," says Emborg. "But in the end, because we're [a small team of] eight people, we decided that it's not a viable playstyle, so it's not really useful for you playing the game. I would've loved to have it in there, just because that would be cool."

It was also a conscious decision to restrict the Echoes' capability to learn - because frankly, thoroughly perfect copies just don't make for great stealth gameplay. "We did have an AI [in previous prototypes] that accumulated much more of what you did. While that was very interesting to look at - 'Wow, they're doing that; did I do that?' - it wasn't particularly fun," says Emborg. "It was difficult to make a level that used that in an interesting way. And what actually happened was that people playing it kind of gave up on it, because they couldn't do anything about [the enemy knowledge] anyways. Pretty quickly, you had enabled the Echoes to do everything, so you ended up with what I would call a 'normal' enemy in a game that didn't really utilize the core idea in any meaningful way. So scaling it back and making it much more dynamic made it much more fun for people."

Of course, Echo has options for those who want to test the limits of outsmarting their own clones: beat the game, and you'll unlock Legacy Mode, where your clones learn your repertoire over the course of two blackout cycles, rather than just one. For the hardest of the hardcore, you can disable the informative sphere HUD and start up a Legacy Mode playthrough on Ultra Hard, where Echoes need to be shot twice (rather than once) before they'll go down. The only way you'll make it with your limited supply of ammo is to line up your shots with deadly accuracy, as your futuristic bullets can pass through an unlimited number of targets. "We did that simply because - if you can line them up and shoot many with one shot, you don't teach them to shoot a lot," says Emborg. "You get lured into this mindset where, whenever you aim, you're like 'I could probably get these two...' And then you're too late, and they grab you or something like that," he laughs.

That kind of panicked scenario - where you're forced to change your plan of attack and adapt to stressful situations on the fly - is often at the heart of the very best stealth games. "It's an ongoing exercise in self-control, and keeping a cool head," muses Emborg, as he inadvertently sums up the appeal of Echo: the need to be constantly aware of how your reactions will be reflected by the Echoes, and how you'll respond in kind. "Some people are very, very good at that, and some people are bad at it, and I feel like both ends of that spectrum can have fun with it," he adds. You'll be able to find out which side of the spectrum you're on when Echo launches for PC on September 19 and PS4 soon after.