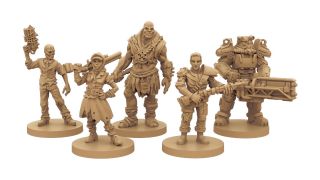 First Fallout got a tabletop strategy game, now it's getting a proper family night board game. Er, if your family doesn't mind irradiated mutants and gory deaths, I mean. Publisher Fantasy Flight Games has revealed Fallout, "a post-nuclear board game for 1-4 players" and speaking as a long-time fan of all things power armor and super mutant, it looks pretty radical.

If you're not already familiar, Fantasy Flight is one of the biggest names in tabletop gaming. In fact, the company brought us a splendid board game based on Doom (another Bethesda property) just last year. Unlike that game, you'll be able to play Fallout solo, though it supports (and will probably be more fun with) up to four players.

Players can select one of five characters, including a vault dweller, a ghoul, and a super mutant, each with their own special characteristics; for example, the Ghoul has relatively low HP but is healed instead of harmed by radiation.

Then you can take them into one of the scenarios based off of Fallout 3 and Fallout 4: The Capital Wasteland, The Pitt, The Commonwealth, and Far Harbor.

Significant spots like Diamond City have a set location every time, but the places between them are randomized for unpredictable adventures. I also choose to believe that the hex-shaped location tiles are a subtle callback to the grid-based isometric worlds of Fallout and Fallout 2.

By exploring these regions and completing missions in the main storyline or side quests, your character will grow using a simplified SPECIAL system and competing factions (like the Railroad and the Institute) will advance their agendas. Enterprising players have multiple ways to win - or lose, if the factions move too fast and decide they don't need you any more.

The Fallout board game will arrive in the fourth quarter of 2017. In other words, it'll be around in time for the holidays. And yes, I am very tempted… though, if I'm being 100-percent honest, I might want it for that Ghoul miniature in the dapper suit and tie alone. Check out our list of the best Fallout 4 settlements for more wasteland fun.