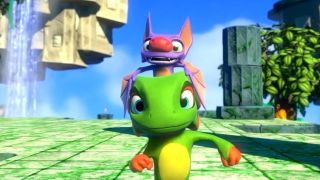 Yooka-Laylee is an old-school platformer meant to evoke those childhood memories we all hold so dear. And what could be more childlike than giggling at farts? A new Gamescom trailer for the upcoming Kickstarted game has our heroes expelling gas, riding in a minecart, turning into a bulldozer, dodging laser beams, and more.

Basically, everything the 9-year old version of you would call awesome:

Developer Playtonic recently released the Yooka-Laylee Toybox on Steam, which lets those who backed the game's Kickstarter get a sense for its movement and gameplay mechanics. The full release for PC, Xbox One, PS4, and Wii U is scheduled for March 2017.