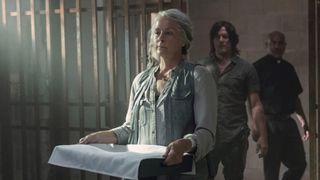 Warning: Spoilers for The Walking Dead season 10 episode 7, "Open Your Eyes", ahead

"Open Your Eyes", the penultimate episode before The Walking Dead season 10's mid-season break, certainly gives us all the justification we need to take its title seriously. For almost the entirety of its 45 minute runtime, I was left wondering why the show was spending so much time with Siddiq, focusing again and again on the doctor's painful memories of his kidnapping, as it has been for much of the season so far. It felt like The Walking Dead was once again stretching the definition of filler to its limits… until that final scene.

It turns out that this was Siddiq's swansong; a chance to get his house in order and enjoy precious moments with those closest to him (including the audience) before an unexpected demise at the hands of Dante, who is revealed to have been operating undercover for Alpha this whole time. That twist, revealed by way of Dante's horrifying mouth percussion, is genuinely spine-tingling, while bringing to light the clues that have been under our noses this entire time, such as Sidiq's strange obsession with Dante's mouth – one of the few human features visible beneath a whisperer mask.

Props are due to Avi Nash, who beautifully captures Siddiq's imploding cascade of emotional states in a way that's impressionable but never overly histrionic. While he's only been around since season 8, and there's a very minor chance that Siddiq is still alive, the actor can leave the show with his head held high, having brought some much needed warmth and humanity to The Walking Dead over the last few years.

Beyond its Siddiq sendoff, "Open Your Eyes" saw a number of other Alexandria-Whisperer interactions come to a head, as Carol's prisoner succumbs to death by hemlock, Aaron and Gamma's negotiations hit close to home, and Lydia decides to head back towards her mother's territory. That former altercation is initially presented as a mistake on Siddiq's part, but it's looking more and more likely as though Dante intentionally poisoned the prisoner to prevent him spilling any crucial info on The Whisperers. Indeed, everything that has happened at Alexandria over the last seven episodes, is now being called into question with Dante's true loyalties laid to bare, adding an interesting layer of intrigue to former events.

On the flipside, it looks like Gamma is this close to defecting from The Whisperers, especially in light of her discovery that Lydia is still alive, once again emphasising Alpha's one point of weakness as a leader is also her last crumb of humanity as a mother. Considering that Lydia herself is now back on Whisperer territory, and looking to start a fire, Alpha's authority is thus on the verge of falling apart, and not looking forward to how she might react to that change.

A lot of questions are now left hanging as we head into The Walking Dead season 10's mid-season finale. Did Siddiq tell anyone else about the infected water supply? What are Dante's plans for Alexandria? And is another key character about to bite the dust alongside "Open Your Eyes" heartbreaking fatality? Episode 7 has left everything to play for, but – more importantly – The Walking Dead is starting to feel relevant again. If Siddiq's sacrifice was the cost for that uptick in quality, then so be it.

For more, check out our full Walking Dead recap to catch up before season 10, or watch below for our latest episode of Dialogue Options below.