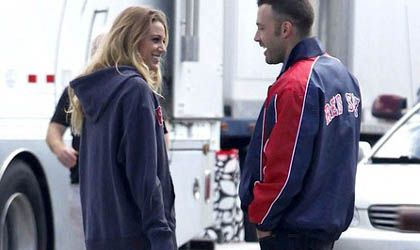 Charlestown, the opening title-scrawl informs us, is the world’s capital for such employment, the tricks of the trade passed from fathers to sons. Then a voiceover kicks in, running details on a pair of security guards who are about to get rolled.

Gravel-toned, pragmatic, it’s the voice of Doug MacRay (Ben Affleck), the brains of the brawny crew who hit a bank. The commentary won’t appear again until the closing scenes. It doesn’t need to, its job is done: we’re 20 seconds into Affleck’s sophomore directing effort and we already know this is a hardboiled crime drama, a modern-day noir.

And while The Town glories in genre tropes it also dumps any overt stylings or clipped, staccato dialogue, instead keeping the action alive and lithe. Keeping it real.

The plot is conventional, clichéd even, MacRay trying to find that one last job, get out, “put this whole fuckin’ town in my rear-view mirror.” No one will let him. The vicious, leather-skinned ‘florist’ (Pete Postlethwaite) who assigns MacRay his gigs is not prepared to lose him.

Loose cannon Jem (Jeremy Renner) – MacRay’s right-hand man, his oldest friend, a guy who “lives for coke and Xbox” and who took nine years over ratting – would see it as a personal betrayal. And dedicated Fed Adam Frawley (Jon Hamm) is methodically building a case, MacRay’s 12x8 glossy stuck front and centre in a wall of photos.

There’s a girl, of course. Claire (Rebecca Hall) is no femme fatale, per se, but she’s certainly dangerous to know, to love, and her presence upsets the status quo and sets dominoes tumbling. She manages the bank MacRay and his boys take down in the first scene. Gun to head, it is she who opens the safe and is then taken hostage to leverage the getaway.

Set loose, it transpires she lives four blocks from MacRay. He says he’ll ‘deal’ with the situation. Instead he falls for her, the one woman who can identify the gang…

It’s the stuff of movies but firmly grounded in the city where Affleck grew up, among the streets and people he knows, and events play out against freeways and chainlink fences, construction sites and baseball parks, bars and Laundromats.

Unsentimental and unforgiving, this is a film composed of bleached daytime visuals and dirty neon nightscapes; the only beauty on show is the hard, glinting sunlight bouncing off cars in a lot.

The characters are products of their environment. They wear sweatshirts, tats and bling, talk casinos, ponies and strip joints. They’re slumped by disappointment, hardened by violence. Their friends are fuck-ups, their families torn apart. “It sounded like a trapped animal,” MacRay flatly tells Claire, describing his father’s weeping when his mother left. “I’d never heard a man cry before.”

It’s everywhere, this pain, each private wrench contributing to a broken society. Jem’s dad was killed in prison, his mother died of HI V. Claire lost her brother. MacRay’s on-off squeeze Krista (Blake Lively) is a damaged single mom who drinks and fucks and does her best.

And so it is that MacRay and Claire cherish their growing trust, protect it. Their love is new and not yet sullied, shining with hope in a town without any. But their relationship is doomed from the start. Their trust is built on lies. “Ask me anything you want,” MacRay pleads when Claire’s belief in him has been shattered. “I won’t believe you,” she says. “Yes, you will.” “Why?” “Because you’ll fuckin’ hate the answers…”

The Town is full of great exchanges, great scenes, all of them infused with authenticity. The action, when it comes, is vital and well handled, with all three of the movie’s heists utilising whip-pans and an urgent percussive score to hustle and hurtle. But it’s the troubled calms before the storms that most impress.

Affleck is the lynchpin, his smirk now more sad than smug. Renner lends a dangerous, thrilling energy to proceedings, the muscles on the back of his neck bunching as his rage sprays out in all the wrong directions.

Mad Men’s Hamm brings depth and control to his obsessive G-Man, a movie staple. Gossip Girl’s Lively does even better, her tart with a heart far from off the peg – the pain and spirit she accesses deserve Academy scrutiny. And Hall is strong and vulnerable and plain damn lovely; who wouldn’t lose his heart to her?

Affleck’s drama isn’t perfect: support characters are only sketched in, a seemingly impossible escape from a surrounded building is stolen goods and the closing voiceover is glib. But these are niggles, and The Town rises above them. In a year when so much of American cinema is bankrupt, it packs real, serious heat.