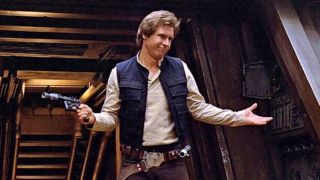 More details about the Star Wars spin-off Han Solo movie have emerged, and fans of the scruffy-looking nerfherder should be pleased to hear that a very important moment in Han's life will be shown on film for the first time. According to Hollywood Reporter writer Borys Kit, we'll get to see the moment Han acquires the Millennium Falcon.

Now, just in case you're not familiar with the original trilogy and the circumstances for this, here's your obligatory spoiler warning, along with a picture of a tauntaun sleeping bag so you don't accidentally scroll too far and see something you don't want to see. If you want to know the setup, scroll past the tauntaun. If you don't, don't.

Remember how in Empire Strikes Back, Lando asks Han, "What've you done to my ship?" To which Han responds, "Your ship? Hey, remember you lost her to me, fair and square." Well, according to Kit, sources close to the film have said we'll see just how fair and square the bet really was. So, yeah: spoilers, Lando loses.

Personally, I think there are several moments of Han Solo's life that a… erm, solo film needs to show: meeting Chewie, meeting Lando, donning his trademark vest, and obtaining the Millennium Falcon. So I for one see including this moment as a no-brainer. The only question is, will the new movie show Solo winning the Falcon in a game of sabacc (as is currently canon) or something else?