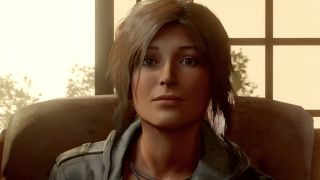 We all forget things. Our phone chargers, our keys, deleting the wrong endings from our massive blockbuster games... which is what happened with Shadow of the Tomb Raider for a few players who skipped the day one patch. You can watch the whole thing below.

This post-credits scene shows Lara Croft back at Croft Manor, getting an envelope from Jacqueline Natla. Tomb Raider diehards will recognize the name from the 2006 original, where Natla was the main villain. Tomb Raider starts with Natla asking Croft to head to Peru on a mission to retrieve part of an ancient talisman, but the relationship sours from there. This ending would suggest that, with the reboot trilogy now complete, Crystal Dynamics is looking to follow the storyline of the original Tomb Raider from the PS1 era, and perhaps was patched out because the studio wasn't ready to reveal that just yet.

It could also be that the studio has since decided on a different direction for post-reboot Lara, and the official statement seems to suggest that. A Tomb Raider Forums member by the name of ArigatoGozymas reported that they received a statement from Square Enix on the matter as part of the Official Fansite Program.

"During the course of development on Shadow of the Tomb Raider, multiple post-credits scenes were explored," the statement says. "Unfortunately one of the directions that was considered, but not chosen, was mistakenly included in the game. The Day One patch fixes this error, along with many other improvements. As always, we highly recommend that our players install the patch to enjoy the complete and most up-to-date experience."