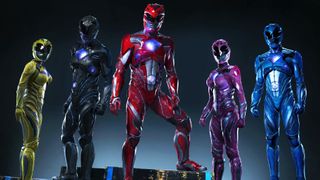 We're getting a new Power Rangers movie and that means a whole new look for the entire cast of characters. Elizabeth Banks' Rita Repulsa is probably the biggest departure from previous versions, as early pics showing her decked out in an emerald ensemble caused a bit of a stir. But Banks has proven she can pull off outlandish costumes in the past which bodes well for her performance. As for the Rangers themselves, well, they're not entirely what you might expect either.

This new image from USA Today offers a closer look at their outfits:

They share more of a similarity to Tony Stark's Iron Man suit than Rangers of old. The most noticeable change right off the bat is the headgear. Those handy visors mean they won't have the hassle of taking off their helmets every time they need a breather from fighting with the other Avenge- I mean, Rangers.

Until we get the chance to see them in action, we won't know the reason behind these stylistic changes. Reboots are a way to update and reintroduce fresh spins on old ideas, after all. If the first footage lands this week at San Diego Comic-Con, we might finally get some answers about those glittery get-ups.

Directed by Dean Israelite and starring Naomi Scott, Dacre Montgomery, RJ Cyler, Ludi Lin, Bryan Cranston and Elizabeth Banks, the Power Rangers movie will be released in UK and US cinemas on March 24, 2017.