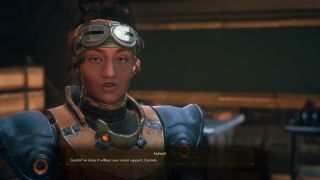 When you're an outsider in a strange new star system, lost in the far reaches of space, there's nothing quite like having a ragtag bunch of misfits to keep you company. The Outer Worlds gives you the freedom to decide how your journey will unfold by making decisions and selecting dialogue responses that can lead to all kinds of unpredictable outcomes. Throughout your space-faring escapades as captain of The Unreliable – a ship you inadvertently come into possession of early on in the game – an eclectic group of companions can join your crew, each of which will bring their own distinctive flair and personality to your adventure. Right from the get go, The Outer Worlds was speaking to my RPG-loving heart in all the right ways. 'Now, if only it would let me romance one of the members of my makeshift crew,' I thought.

From the outside looking in, Obsidian's humour-laden RPG seemed to be the perfect setup for a love affair in the star-speckled Halcyon Colony. I couldn't help but draw parallels to Mass Effect, and found myself yearning for an intergalactic relationship as a result. Here's the thing: You never really know who to trust or if you're actually doing the "right" thing in this bizarre new setting, but it quickly becomes apparent that your companions don't really seem to know what they're doing either, which puts you on mutual footing with those you travel with. As much as my heart continued to wish for romance, The Outer Worlds' fully realised companions – and the role the game lets you fill in their lives – made up for the lack of it in a refreshing sort of way.

Match made in heaven

After spending some time in Edgewater, your first port of call in the story, my disappointment at the absence of romance intensified as soon as Parvati entered the picture. As a sweet natured and kind-hearted mechanic, her caring personality and awkward way of expressing herself instantly won me over. Why oh why couldn't Obsidian have just let me live my best life by having a romantic relationship with this endearing engineer? As the story progressed, though, I began to value taking a step back from the pursuit of love to take on the role of a friend and supporter.

On an orbital station known as the Groundbreaker, Parvati asks to meet an engineer by the name of Junlei Tennyson. When they meet, it's obvious there's something in the air between the two, and our dear mechanic clearly has a crush on Junlei. It's through this developing relationship – and your role in encouraging Parvati to pursue it – that you are able to learn so much about her, including that fact that she's asexual. She expresses that she was never really one "for physical stuff," which makes her wary of putting her heart on the line to pursue a relationship.

Offering my support and guidance to Parvati felt just as fulfilling as forming a romantic attachment, and seeing her develop a relationship outside of my own role just made her seem so real. Sure, I might have had a small part to play in it all, but ultimately it feels like Parvarti is taking charge of her own path in the world. I like the idea that even when you're out of the picture, she is out there living her best life.

It was only too easy to change the way I would traditionally role-play a character in an RPG of this style to become a mentor and friend to each of my companions. In a way, I became their companion just as much as they were mine. Before I knew it, I was already more than attached to the idea of filling the space boots of someone who was there for them in a different kind of way.

In fact, every companion feels like a real person you might meet down the pub. Each companion has their own rough edges and flaws, which only serves to ground them in a setting that is otherwise larger than life. One great example is Nyoka, the hunter you meet on Monarch, who likes to overindulge in booze. When I returned to the Unreliable and saw her strewn across the ground in her quarters after one too many bevvys, it reinforced what The Outer Worlds makes a case for so well – nobody's perfect.

A little like the loyalty missions in Mass Effect, or the personal quests in the Dragon Age series, The Outer Worlds has companion missions. The missions differ from companion to companion, but each one offers you the chance to learn more about your followers and help them handle their own particular problem… or, you know, make things worse for them if you're so inclined. Throughout these missions, you quickly come to understand that each crew member is searching for their own answers, and no one really feels like they fit in anywhere.

Just as you can become a matchmaker for Parvarti, you can take on the role of a supporter or antagonist as you help out each companion. Since I couldn't smooch anyone, I poured all of my energy into being the best friend I could be and help the eccentric bunch in any way I could.

That could range from helping Felix, the somewhat directionless rebel, confront his childhood friend, to supporting Nyoka as she seeks to avenge her old teammates by taking out a Mantiqueen. It's through these missions and in our conversations aboard The Unreliable that these characters truly come to life; each of them has room for development and growth, their own hangups to overcome and dreams to chase, and I relished the opportunity to help each of them navigate this chaotic world by being the best friend that I could.

Nyoka is in pain, which is something that you might not immediately notice when you first meet her on Monarch. She's lonely and looking for a new place to belong, and I suddenly felt like I could offer my support and help her get the closure she so desperately needed. All of their goals are pretty detached from your own character, but that again reinforces the idea that all of your companions are their own person, with feelings and thoughts separate from your own, rather than being the no-questions-asked loyal followers.

This becomes especially apparent if you decide to go against their wishes. Your companions aren't afraid to leave your side if you mess up or do something they've clearly said they're adamantly against you doing. I've always loved this aspect in games like Dragon Age 2 where your companions are so divided in opinion, it's very easy to earn yourself an enemy and even go so far that they'll leave your company on principle.

As someone who's a self-confessed romantic, nothing makes my heart go pitter-patter quite like a game that includes romance options, and I've always found it helps me become more emotionally invested. I don't just think there's value in including romance in games because of my own fondness for it, though. We're still pretty limited in terms of the amount of games that do include optional intimacy – especially when it comes to inclusive romances. Outside of visual novels, RPGs are a natural fit, and it's hard not to hope for more when a new one comes our way.

As disappointed as I was initially, The Outer Worlds still offers a very fulfilling way to get to know your companions, and it utterly succeeded at stealing my heart in a different kind of way that I appreciated more than I could have ever expected.

Jumping into the adventure yourself? Here are all The Outer World tips you need to know or check out our review below.