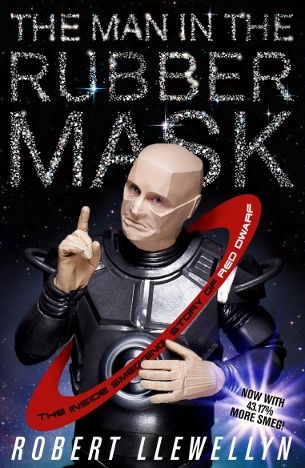 The Man In The Rubber Mask by Robert Llewellyn review.

Worry not, you haven’t been poisoned by a despair squid and awoken in the technological dark ages (er, 1994) – Robert Llewellyn’s warts ’n’ all account of life behind the scenes of Red Dwarf has indeed seen shelves before. This new version adds 43.17% “extra smeg” (aka words) and brings Llewelyn’s journey as Kryten right up to date, with new material on the making of series VI to X.

If you have any interest in the show it’s an essential read (even if you’ve read Rubber Mask before), offering insights even the hours and hours of DVD extras haven’t touched upon. Despite the 19-year gap, Llewelleyn’s pen is as witty and irreverent as ever. It’s his charisma and inventive potty mouth which carry you through the occasionally dry anecdote and on to the next eye-opening yarn.

Despite forging a separate, successful career as a TV presenter and tech enthusiast, Llewellyn keeps the focus firmly on the boys from the Dwarf, which results in a couple of jolting, years-long gaps in the narrative. There’s no shortage of often quite incredible events to cover though, such as Rob Grant and Doug Naylor’s split, the Craig Charles scandal, a lively trip to Dragon*Con and of course the return of the series in 2009 and 2012. Best of all, he reveals just how far along the road the Red Dwarf movie went (depressingly close to shooting). Smegging good stuff.

Read our Isn’t It About Time You Gave Red Dwarf “Back To Earth” Another Chance? feature.
Read more of our book reviews .