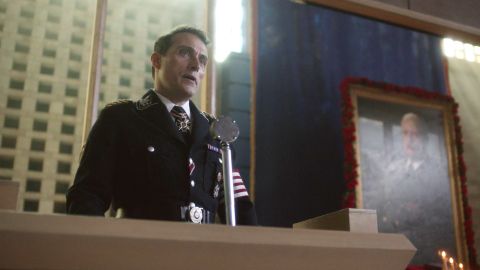 An intriguing premise with some stand-out characters, let down by aimless story-telling and mid-season filler.

The first season of The Man in the High Castle - an Amazon Original series based loosely on a novel by Philip K Dick - is a quiet disappointment. While it creates a wonderfully-realised, incredibly intriguing world, everything that happens within it is profoundly ordinary and in many ways anti-climactic. Characters (with the exception of Rufus Sewell’s Obergruppenführer Smith) are bland, potentially interesting plot threads meander then fade without resolution, and the show plods along at a ponderous pace. Structurally, and thematically, season 2 very much picks up where the first left off…

However, while all the above criticisms are still true of season 2 - to a lesser extent in some cases - The Man in the High Castle greatly benefits from an almost total detachment from the source material. As with Game of Thrones season 6, this TV show gets more interesting when it starts to carve its own path. The standout narrative here - and perhaps the only one with any genuine entertainment value - is that of Smith struggling to protect his family and his adopted country against enemies within and without. His character is complex, substantial, and wonderfully realised by Sewell. On balance, I’d say that anyone who waded through the first season should give this follow-up a go, purely to see the Smith narrative develop and blossom over the course of the ten episode run. If you’re new to The Man in the High Castle? Well, you really need to experience season 1 to understand season 2, and 20 hours is a lot of slog just for one decent character arc.

Ok, let’s get into specifics. Spoilers follow, so if you’ve not seen the show, look away now. The start sees our ‘heroes’ separated, and the fact that Juliana and Joe are never seen together throughout this whole season highlights not only the artifice of their relationship, but also the fact that they’re both individually weak characters. Joe spends most of the season sulking around Berlin, raging about his daddy issues, his reluctance to kill, and his school-boy crush on Juliana. None of it is that convincing, nor is the romance he sparks off with Nicole, a German pure-bred femme fatale figure who - instead of challenging Joe to become the man he was born to be - kind of simpers around him a bit, does some drugs with him, and ends up sleeping with him in the final episode. The end of the season sees Joe (and his scheming father) locked up on Himmler’s orders. Joe angrily exclaims about his father's arrest as he's dragged away, despite knowing that he's fully responsible for allowing it to happen and personally agreeing that Heusmann's thirst for nuclear war is deeply wrong. Hopefully some time in a Nazi jail will help him see things more clearly, should he live long enough for a third season.

Juliana’s story is a little more interesting, but her character remains stoically unlikeable. Betrayed by the resistance, adopted by Smith, thrown back into the resistance, betrayed by the resistance again, saves the world a bit - she does it all while pouting continually, and wishing that everything was happening to someone else. Well, so do I. She’s a neat plot device for advancing Smith’s narrative via his son, but as a character Juliana remains a total dud. Strangely, the show seems to place her on a pedestal at the end, as she plays the forgotten hero who saved the world through her kindness. The actual Man in the High Castle (Hawthorne Abendsen - played by Stephen Root), who appears so fleetingly in the whole season you’d be forgiven for missing him completely, hails her as the only person who could have achieved such a feat. She accepts this honour with a pout and a sob that very neatly sums up her entire role.

Similarly petulant is Frank, and his San Francisco resistance story. Perhaps this is entirely the point, but I found myself desperately cheering for the brutal murderers in the Kempeitai more and more, as Frank sulked his way through the entire season. Frank’s stressful dabbling with the Yakuza is revealed as nothing more than a plot device to free Ed from prison, and his eventual demise during the bombing of the Kempeitai HQ feels like a welcome end to a character not just poorly realised, but actually quite hateful.

Given the fact that all three ‘good’ characters end up playing bland or dislikeable roles is - I hope - one of the show’s smarter pieces of intent. One thing The Man in the High Castle does well is blur the lines between good and evil and - by the end - you’ll even find yourself rooting for Himmler. The resistance on both sides of America come across more like thugs than liberators, and supposed villains like Obergruppenführer Smith and Inspector Kido suddenly become noble heroes. However, because the world is so represented in such stark, black-and-white terms, this often feels at odds with the show’s frequent trips to the moral grey areas.

Smith - for example - is presented as a saviour. He’s not only a conscientious patriot, but also a loving father and good friend to those he chooses to connect with. The system he upholds, however, is painted in such dark shades that you’re not really sure whether you want Smith to succeed. I’d say this is half intended, half accidental, but each episode leaves the viewer feeling emotionally empty, as the show robs us of both true victories or defeats. The highest point in the whole season is where Smith reveals Heusmann’s treachery at the last minute and Himmler rallies a crowd of 150,000 Nazis to cheer for the American man in the German uniform.

Similarly, Inspector Kido transcends the boundaries of Axis rivalry and protocol to deliver the vital film to Smith, having lost his dearest friend… but he’s still someone who actually enjoys torturing and murdering his enemies, so should we be that pleased for him? By constantly showing us the grey area between good and evil, The Man in the High Castle season 2 blunts the extremes of its plots. In other words, it doesn’t allow us to truly enjoy the best bits and prefers to revel in low-level misery instead. There are some interesting ideas, but they rarely go anywhere or deliver on early promise.

The thread with Trade Minister Tagomi in the alternate reality, for example, is as ludicrous as it is tedious, and the fact that he brings back the footage of the H-bomb test to ‘save the day’ is perhaps the silliest moment of the whole season. That it also turns out to be another of the show’s half-intended McGuffins is the icing on the sadness cake, as Heusmann eventually watches the film and decides to declare nuclear war anyway. Would Himmler have listened to Smith about the conspiracy without seeing the footage? It seems highly likely, given his eagerness to rise to power, so we’re left wondering what the point really is, aside from showing us a longer glimpse at the alternate universe.

2016’s best TV - like Westworld season 1 and Game of Thrones - showed us that moral ambiguity and narrative extremes can live side-by-side, coalescing to give us truly compelling entertainment within beautifully realised fantasy worlds. The Man in the High Castle season 2 aims for exactly that, but thanks to dull characters and mostly flaccid storylines, it falls short of being essential viewing. It drifts often and at length, too in love with its own wonderfully recreated world to realise that - half the time - it’s going nowhere.

The Man in the High Castle season 2 review: "By the end, you will find yourself rooting for Himmler"

An intriguing premise with some stand-out characters, let down by aimless story-telling and mid-season filler.