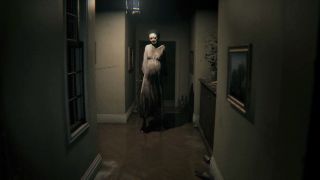 Just when we'd recovered from the realisation that Lisa is constantly stalking you through PT's halls and discovered an unused bathroom scene in which Lisa can be found decapitated in a bathtub, YouTuber Lance McDonald is back, only this time he's broken free of PT's looping hallway to take us on an unofficial tour of Hideo Kojima's Silent Hill.

As McDonald explains in the video below, his latest hack steps out where the playable teaser makes the reveal that the protagonist is/was none other than The Walking Dead's Norman Reedus. The scene is rendered in real-time, which means with a little hacking magic, we're able to explore those foggy streets ourselves

"So there we have it, the entirety of Silent Hill as it exists in P.T., probably more unseen content in this one map than there's actually 'seen' content in the normal game hahah," McDonald said in the video description (thanks, Eurogamer). "But seriously that hack to make the player float took months to make work so I hope you did find something interesting about this one, it's been a very long time in the making. Not exactly cut content is it? But just falls into the category of 'unseen'."

As McDonald illustrates, playing out of bounds means the player initially falls straight through the environment – and doing so forces the "reset" scene in which Lisa jump-scares the player. But with a little tinkering to enable the avatar to float above the ground, they were able to take us down the streets previously only accessible by Reedus' character.

"She does the jumpscare any time you mess with the player location without applying a special fix to make the game think you’re still on the ground," McDonald explained when asked how many times they were jumped by Lisa's terrifying visage. "It’s hard to predict and I screamed multiple times while getting a few of the overhead camera shots for the video."

Now that Death Stranding has shipped, Hideo Kojima has revealed he's starting to think about his next project… and he's getting himself ready for it by scaring himself stupid with horror films "to awaken [his] horror soul".

Kojima has admitted in the past that he struggles watching horror movies (it's okay, I'm with you, Hideo), but that didn't stop him making PT, one of the most terrifying video game experiences we've ever played (it even made our list of the 20 best horror games ever made even though the full game, Silent Hills, was tragically cancelled after Kojima parted ways with Konami).

Now, it seems, the famed developer is preparing himself "to make the scariest horror game" by watching "the scary movies in order to awaken my horror soul".

Silent Hills might be nothing but a pipe dream now, but Death Stranding is finally here. Did it make our list of the best new games 2019 though? Click to find out...