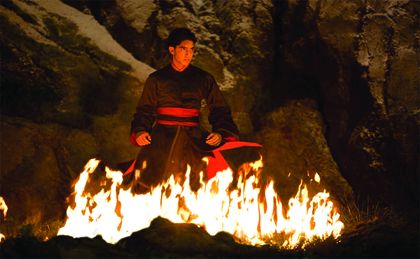 The Last Airbender review - There are a lot of benders in M. Night Shyamalan’s latest.

There are Firebenders, Earthbenders and Waterbenders. There’s only one Airbender though. In many ways, he’s the biggest bender of them all.

Done chortling? Good. Because there are many other things to laugh at besides the fact that ‘bender’ has certain childish connotations this side of the pond.

You have Slumdog Millionaire’s Dev Patel, scowling and petulant as a banished prince who can’t return home until he has located an all-powerful ‘Avatar’ unseen for 100 years. (“Bring me all your elderly!” he orders in one of the more priceless lines.)

You have insipid teen sibs Katara (Nicola Peltz) and Sokka (Jackson Rathbone) who, despite residing in the icy North, talk like they’ve flown in from Sweet Valley High.

And you have Airbending Avatar Aang himself (Noah Ringer), a pint-sized baldie with a Mohican-style tattoo and nought charisma. (“Do you have a spiritual place?” he asks, as if enquiring where the loo is.)

Fans of the original animated TV show will be up to speed on the fundamentals of the Airbender-verse, a land where each of the four elements has its own ‘Nation’ and where the gifted few – through a boggling combination of mind control, Tai Chi and dodgy FX – can manipulate those elements.

With no Airbenders to keep the peace, the Fire Nation is out to conquer all. To stop them, Aang must learn to bend water, fire and earth too. Little of the above is rendered exciting or even intelligible onscreen.

But the bottom line is that Shyamalan, Oscar-nominated director of The Sixth Sense, the bloke once regarded as the next Spielberg, has been reduced to a Lord Of The Rings-Heroes-Golden Compass mash-up laden with some of the worst acting, action and dialogue you’ll endure this year.

Some may take heart that, having sunk so low, Night can’t possibly go any lower. But didn’t we think that with The Happening?