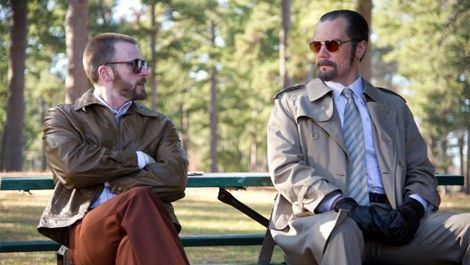 Arriving in the same month as Man Of Steel , Ariel Vromen’s The Iceman proves – as if we didn’t already know it – what a versatile, volatile and visceral actor Michael Shannon is.

Playing General Zod is one thing. But here, with his turn-on-a-dime demeanour and devil-in-the-eyes look, there’s something utterly chilling about Shannon as real-life new Jersey hitman Richard Kuklinski – who had killed more than 100 targets for the mob by the time of his arrest in 1986.

That this is a gangster film with as many emotional beats as brutal ones stems from the fact that Kuklinski led a double life. His family’s unawareness of his profession is underlined early on. It’s 1964 and Kuklinski is on a date with future wife Deborah (Winona Ryder, excellent). The man is shy, sweet. Later on, he slits a bloke’s throat after a brawl.

We then follow Kuklinski’s rise – an ascent complicated when, unbeknown to Demeo, he partners up with fellow contract killer Robert Pronge (Chris Evans, almost unrecognisable). Known as Mr. Freezy, Pronge uses an ice-cream truck as cover for his own murder missions and even teaches Kuklinski how to deep-freeze corpses (earning him his icy nickname).

As Vromen ratchets up the tension, Shannon perfectly essays his character’s increasing paranoia, as his violent lifestyle threatens to put a bullet through his suburban domestic life. One sublime scene sees Demeo threaten Kuklinski outside his daughter’s birthday party, Liotta baring his teeth both literally and figuratively.

Design-wise, The Iceman knocks it out the park, the costumes, cinematography and settings nailing the grim-and-gritty ’70s feel.

GoodFellas is an obvious inspiration (and not just because of Liotta’s casting). If Vromen doesn’t scale the heights of Marty’s masterpiece, there’s still much to marvel at.

Yes, you can argue it’s a conventional biopic; that we’ve seen it all before. But Vromen directs with such vigour and Shannon performs with such deadly intent, it’ll sweep you up.