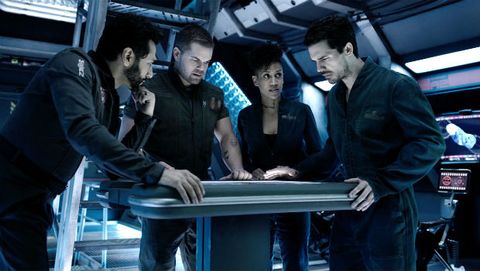 A mostly thrilling episode that stumbles in its most important moment.

Aliens are tricky. Make them too human, and they’re boring, but make them too alien, and they seem unrealistic or unsatisfying. When we finally see what’s at the heart of Eros towards the end of Home, we come face to face - literally - with the latter kind of alien presence. An episode thick with breathless tension is undone just when it should be its most exciting.

Eros is making a beeline for Earth, with Miller still on board tending to his pet nuke. Earth makes the only move it can and launches half its nuclear arsenal, hoping to turn Eros to dust before it gets too close. Excellent idea, except for when Eros manages to make itself invisible to radar. The Rocinante can act as guidance for the missiles, so long as it can keep pace with Eros, though the necessary speed it will have to maintain will likely kill the entire crew. Running out of options, Miller heads into the heart of Eros to drop off his bomb and hopefully blow the station from the inside. The battle against Eros - or more accurately, against the protomolecule that’s hijacked it - is just about perfect, as each move and countermove leaves you holding your breath, terrified to see how it all turns out. The stakes are enormous, but the performances are restrained as every character is focused on the problem and their role in saving an entire planet from catastrophe. The scene between Chrisjen and her husband Arjun, in particular, is an outstanding example of how great writing is sometimes about what characters don’t say.

All the major players are active in Home - the UN on Earth, Fred Johnson on Tycho, the crew of the Roci, and Miller on Eros - all separately working together to find out who’s going to win the race. And then Miller finally makes it to the source of the heat bloom, and lo and behold, it’s the Blue Falcon, where they found Julie Mao’s body what feels like a million years ago. And this is where Home starts to get pretty hokey. Miller theorizes that Julie’s consciousness has somehow melded with the protomolecule, and that she’s what’s steering Eros, mistaking it for her ship The Razorback. Ok, that’s a neat idea, but when we see a naked Julie floating in bits of blue goo, it’s a bit much. Except she’s not really naked; she has a navel but lacks nipples. Look, I understand the need to appease TV censors, and while it would make more sense for her to be starkers, that won’t fly. Fine. Then why not depict her in her Razorback flight suit? That would fit with her mental state while also maintaining necessary modesty. The half-measure is nonsensical and distracting.

Protojulie is sad and scared and just wants to go home, which is why Eros is rocketing towards Earth. Miller tries to explain the actual situation to her and suggests maybe heading for Venus instead, but he can’t really get through to her, so he takes off his helmet and kisses her. Hoo boy. In fairness, it’s less about the power of loooooooove and more about his resignation to his fate. He’s been ready to sacrifice himself to save Earth ever since he took that broken nuke from Diogo, and reaching his end with what’s left of Julie would be pretty ok with him. Taking off his helmet and breathing in protomolecule-saturated air and letting whatever’s gonna happen happen is very appropriate for Miller, who’s just pretty damn tired by this point. But him cuddling a glowing, floating, not-quite-naked Julie is just… dumb. Overall, the protomolecule effects are just stunning, but the Protojulie visuals rob Miller’s final moments of their beauty.

Protojulie steers Eros into Venus, saving Earth. Well, at least from the immediate problem. There’s still the fact that Mars is itching for war, half of Earth’s nukes are still flying around the system, vials of protomolecule are stashed on a rock somewhere and who the hell knows what the stuff on Eros is going to do to Venus? We haven’t seen the last of Miller, I’m pretty damn sure.

A mostly thrilling episode that stumbles in its most important moment.