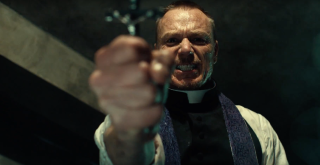 Crosses? Check. Posession? Check? Levitation? That's here too. No pea soup just yet but this is only two minutes of Fox's upcoming Exorcist TV show so that might literally pop up later. As will become clear when you watch the trailer, this isn't just an episodic version of William Friedkin's horror masterclass. For one, Geena Davis' daughter is much older than Reagan - neatly side stepping the 21st century moral outrage that would probably cause - and this is the tale of two different priests.

Father Tomas - played by Alfonso Herrera - represents the new face of the Catholic church in his Chicago suburb, while Ben Daniel's Father Marcus Brennan is a modern day Templar Knight so the pair have a slightly different attitude to things. Nonetheless they find themselves having to unite when Davis' Angela Rance starts hearing voices in the walls and claims a demon wants her daughter. This looks like it's been through the Blumhouse school of horror - and there's a very Rec-like sequence in the attic - but that might not be a bad thing. Add in the director of Rise of the Planet of the Apes, Rupert Wyatt and of course Mike Oldfield's Tubular Bells and this could be really interesting when it arrives on Fox in Fall this year.