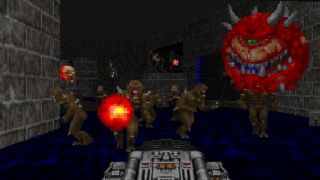 Bethesda is celebrating Doom's 26th anniversary by expanding this year's Doom and Doom 2 console ports with a curated add-ons menu for player-created WADs, and Final Doom and Sigil will be the first to be added.

The news was revealed during Bethesda's anniversary celebration livestream (via Eurogamer), where Joshua Boyle and Jason Leavey, Bethesda Community Manager and Sr. Community Manager respectively, were discussing a big update that will bring a locked 60fps and aspect ratio control options.

The addition of Final Doom and Sigil to the Doom 1 and 2 ports is part of a wider initiative by Bethesda to support community-created WADs. Sigil is the nine-episode unofficial follow-up to Doom's fourth level, produced and designed by John Romero, a co-founder of id Software and an instrumental designer on Doom, Wolfenstein, and Quake.

Final Doom is made up of TnT: Evilution and The Plutonia Experiment, which together add another 32 new levels. Finally, Bethesda has also revealed that the No Rest for the Living expansion pack is on its way to Doom 2 on console. All this new content means a whopping new value for Doom and Doom 2 on PS4, Xbox One, and Switch when it goes live in the near future.

While it isn't yet clear exactly when the big update goes live, it's sure to usher in a flood of community-created WAD add-ons, further expanding the selection of levels available with Doom 1 and 2 on console.

If you're burned through every Doom mod currently available, check out our list of the 25 best FPS games of all time.