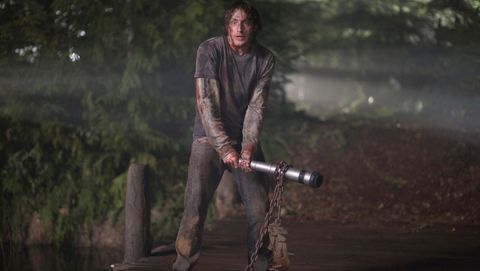 The opening credits of The Cabin In The Woods see Egyptian etchings of ritual sacrifices shimmering in blobs of CG blood. A strange juxtaposition, intriguing.

They’re heading to a cabin in the woods, but as for everything else, all bets are off... So shrewd and playful is this mainstream horror-comedy by Drew Goddard (whose writing credits include Lost, Alias, Cloverfield, Angel and Buffy The Vampire Slayer, here making his directing bow) and Joss Whedon (director of Avengers Assemble, Serenity... wait, this is old news), you just know the clichés are there for a reason.

It starts with the archetypal characters and continues with their encounter, en route, with a local redneck (aka The Harbinger). “I’ve seen plenty come and go,” he gravely intones, and moments later the camera is offering the obligatory overhead shot of their vehicle wending its way up a mountain road. OK, time out.

You know that bit in movie reviews where the journalist bleats about how they can’t say any more because it would give too much away? Well, this is it. And this time you better believe it, because to even talk about The Cabin In The Woods in general terms, with evasive hints and contextual references, is to alert viewers to dog-leg plot turns they’d be better off stumbling upon alone.

Only, this review has 400 words left to run. So, we’ll tread carefully, respectfully, and be sure to give away less than you’ll glean from the trailer, but you might want to clock out now and return when you’ve seen the film.

Still here? OK, don’t say we didn’t warn you. A postmodern celebration and dissection of the horror genre, The Cabin In The Woods delivers few tics and tricks we haven’t seen before. But Halloween did little that hadn’t been done before either, and nor, for that matter, did Citizen Kane; the beauty of Cabin is that it takes bits and pieces from here, there and everywhere and blends them into a vibrant entertainment.

One of the central conceits – that horror movies tap into our subconscious fears, which are rooted in ancient and primal terrors – was explored in Wes Craven’s New Nightmare (“They’re like something from our nightmares,” says one of Cabin’s characters. “No, they’re something our nightmares are from,” replies another), while Scream, Cube, Hostel, My Little Eye and Behind The Mask: The Rise Of Leslie Vernon explore other ideas stashed in the Cabin .

Of course, it’s arguable that all this pulling back of the curtain and drawing attention to the genre’s mechanics hinders viewers from truly investing in the characters: we are, after all, watching a movie, a fact we’re never allowed to forget.

But we certainly like the protagonists, who, it should be noted, subvert expectations as frequently as they cleave to them. The dialogue, meanwhile, is laugh-out-loud funny.

Take the scene where the friends huddle in the cabin’s basement surrounded by iconic bric-a-brac such as dolls, bridal gowns and puzzle boxes. “I’m drawing a line in the fucking sand here,” yelps pothead Marty as Dana opens a cobwebby journal. “Do not read the Latin…”

It’s to Cabin ’s credit that it still works so well despite being shelved for three years, first saddled with a post-Avatar 3D conversion (thankfully no more) and then buried by MGM’s filing for bankruptcy.

In the meantime, some of its tropes have surfaced in, bizarrely, Hostel: Part III , and, naturally, the fourth installment of Wes Craven’s famous franchise. But this is the real scream, sure to appeal to fans and non-fans alike.