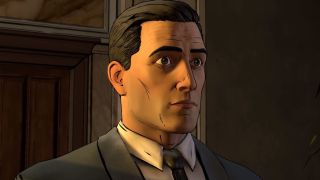 Episode 3 of Batman - The Telltale Series: "New World Order" will hit PC, PS4, and Xbox One on October 25, and it looks like this is where things start getting messy. As in "half your face burnt off and rapidly losing your sanity" messy. Telltale's Batman: Unmasked talk show included a quick teaser for how Harvey Dent's feeling if you didn't save him in episode 2 and… he's been better.

The new game footage starts just after 29 minutes in if you want to watch it for yourself. But this also serves as a handy spoiler-guard if you'd rather not see the gifs I've made of Harvey's second face. What? Of course I made gifs.

Here's a fawn grooming a kitten just in case.

Alright, here's the big reveal of Harvey's new look after being attacked by the Children of Gotham. Don't you feel terrible. No? Eh, you're right, it was bound to happen anyway.

And here's Harvey rapidly succumbing to his bad side. Make no mistake, this episode is gonna be where stuff starts getting real bad for Gotham.