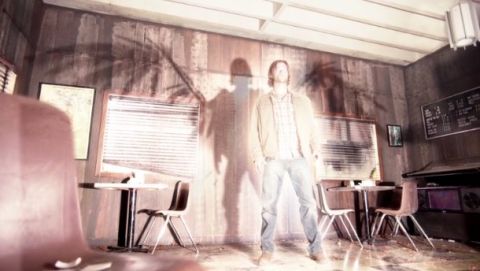 THE ONE WHERE Abaddon returns and sets a trap for the Winchesters.

VERDICT Now, that’s more like it. Season nine’s second episode may be missing its secret weapon – vanilla variety Castiel – but it’s still a tense yarn, with a smattering of emotional gut punches along the way.

After last week’s scene-setting shenanigans, “Devil May Care” gets into the nitty-gritty of the season arc. Abaddon is back, with a plan to be crowned the Queen of Hell.Crowley, meanwhile, is locked in the Batcave’s basement, settling into his new role as Supernatural ’s Hannibal Lector, taunting Kevin at every turn and dispensing the whereabouts of his demonic underlings for the brother’s to hunt, an ulterior motive no doubt lurking just beneath the surface. It’s an intriguing new dynamic. The seemingly immortal Abaddon makes for an imposing big bad, and as far as I’m concerned, the more Crowley the better. How the fallen angels fit into this picture will have to wait for another week.

We’re also introduced to two new hunters – Irv and Tracy Bell. Irv has the classic hunter look and feel down pat; complete with a tragic send-off. But Tracy is something different. She’s given a fabulous introduction, a moment of misdirection that most will see coming, but is no less entertaining because of it. She’s also given a surprising amount of backstory, getting into the hunting game after her entirely family was slaughtered by a demon celebrating Lucifer’s release from the cage (an effective reminder that the Winchesters may never live down past mistakes). She lacks charisma at present, but don’t be surprised to see Tracy show up again in coming weeks.

The highlight is the showdown at the Chemical Corral. It’s a well-staged, high-stakes sequence which backs Sam and Dean into a corner with seemingly no escape, only for Sam’s literal guardian angel to save the day. The three-on-one fight in the diner feels brutal and worryingly hopeless, while Dean and Abaddon’s tangle is oddly sexy. Zeke’s return proves a bravura effects moment and an efficient piece of show-stopping direction, harkening back to Castiel’s first appearance in “Lazarus Rising”.

Andrew Dabb’s witty script is loaded with memorable dialogue, and a handful of Crowley’s trademark snark bombs. But it’s the quieter moments that impress the most: Dean lecturing Kevin on the meaning of family or Sam telling Dean that he’s happier than he’s been for a long time – a sign that tragedy can only be around the corner if Supernatural ’s track record is anything to go by.

FEATURED MUSIC “ Rockin’ Down The Highway ” by The Doobie Brothers is playing while Tracy kills the vampire by the side of the road.

TOP PERFORMANCE Jared Padalecki has always given a little bit of a one-note performance as Sam *ducks rotten fruit* but he’s doing a great job as Samskiel, crafting a completely believable other presence that has no shade of the brother Winchester left barring his appearance. Bravo, sir!

NITPICK Why does Abaddon insist on her demonic army possessing a trio of GIs? What do the meatsuits matter? Super-strength comes from the demons, surely?

DEAN WISECRACKING
Dean: “We going to fight or make out, 'cause I'm getting some real mixed signals here.”

EXPRESSION OF THE WEEK

META MADNESS They’re at it again!
Dean: “Check the net for anything angel-y.”
Sam: “Or demon-y.”
Dean: “Or monster-y or ghost-y. It’s going to be a busy year."

LMAO Dean covering his crotch with his hand after discovering he’s in a town that’s been abandoned because of a chemical leak.

KEEPING UP WITH THE JONESES Dean references The Hunger Games , Breaking Bad , Zero Dark Thirty and the Marvel movies this week. He may be saving the world on a regular basis, but he still has time to keep up with his pop culture.

LOST IN TRANSLATION “I’ll take demons for a thousand, Alex” is a reference to Alex Trebek, host of game show Jeopardy .

SECOND TIME’S A CHARM The actress who plays Sergeant Miranda Bates, Carmen Moore, has already appeared on Supernatural before as a doctor in “The Devil You Know” (5.20).

BEHIND THE SCENES Once again the cast and crew took to Twitter the night “Devil May Care” aired in the states to live tweet the episode. https://storify.com/superwiki/devil-may-care-live-tweets