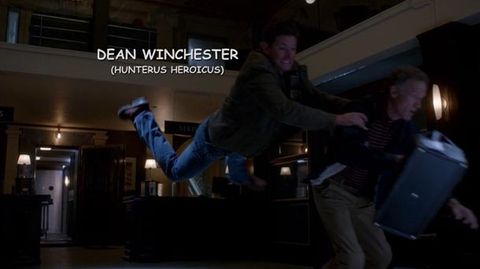 THE ONE WHERE Castiel becomes a hunter and helps investigate a spate of loopy crimes.

VERDICT “Hunteri Heroici” nicks its gimmick from Who Framed Roger Rabbit? but it scarcely matters because this week’s episode is one of the most entertaining 42 minutes of Supernatural in years.

The surreal cartoon capers are unlike anything featured on the show before, no mean feat after eight years on the air, and form the backbone of a pleasingly offbeat mystery. It takes a little too long to get to the really good stuff, but when it comes the slapstick scrap between Dean and Doc-turned-bad Dwight Mahoney is a hoot with fake guns, frying pans and anvils employed to rib-tickling effect.

Amazingly, the Looney Tunes investigation isn’t even the best thing about this episode. Castiel deciding to become a hunter and joining the brothers on the road is every fan’s dream come true and just as funny as you hope it would be. Naturally, Cas steals the show, his “bad cop” moment had me in fits and it was rare that his appearance on screen didn’t result in at least a smile.

The flashbacks are the weak link, playing out a familiar meet-the-overprotective-father scenario until the final twist where Amelia discovers Don is still alive (I say “twist”, but who didn’t see that coming?) It’s a good showcase for Supernatural ’s deft ability to mix wildly different tones and for neither to feel out of place, but little more. And it’s disappointing that the final scene between Castiel and Naomi is essentially a re-run of last episode’s climactic moments, but even with all these gripes it still manages to be one of this season’s best so far.

CONTINUITY The second victim commits suicide because he lost all the money he invested in Roman Industries. Indirectly, you could say the brothers were to blame.

BEHIND THE SCENES Director Paul A Edwards is like the Mark Sheppard of sci-fi TV directors having worked behind the camera on Lost, Fringe, Battlestar Galactica, Heroes, Pushing Daisies, The Sarah Connor Chronicles, Alcatraz and Once Upon A Time . “Hunteri Heroici” marks his first time directing for Supernatural .

BEHIND THE SCENES 2 After writing 16 scripts together with Daniel Loflin, this is the first episode Andrew Dabb has a solo credit on.

FEATURED MUSIC Castiel and Fred enjoy a spot of “Ode To Joy” by Ludwig Van Beethoven during this episode’s climactic moments.

IT’S WOSSISNAME! Amelia’s father, Stan, is played by Brian Markinson, a sci-fi TV staple having appeared in The Next Generation, Deep Space Nine, Dark Angel, Sanctuary, Continuum, Caprica and Battlestar Galactica: Blood and Chrome – where he played the first commander of the Galactica. Markinson also appeared in a previous episode of Supernatural , 1.04 “Phantom Traveller” as Jerry Panowski.

TITLE TATTLE The episode title is a play on similar Looney Tunes naming conventions, where species would be given vaguely latin-sounding (fake) names. During the episode Dean is similarly labelled Hunterus Heroicus, while Dr Mahoney is dubbed Grotesques Villainus.

REFERENCE Of the many Looney Tunes references in this week’s episode one that may have passed you by is that the first victim, Gary Freleng, is named after Bugs Bunny/Porky Pig/Tweety Bird/Sylvester creator Friz Freleng.

REFERENCE 2 Castiel’s turn as “bad cop” is an homage to Peter Falk’s iconic trenchcoat-sporting detective Columbo, albeit with a little less “Just one more thing…” and a little more wild accusations.

TRIVIA The cat (BOB) in the nursing home was “voiced” by long-serving Supernatural stalwart Bob Singer.

DID YOU SPOT? Sam rubs his palm as he would to keep Lucifer at bay during the flashback sequence where he’s washing dishes with Amelia’s dad. Clever throwback, or something more?