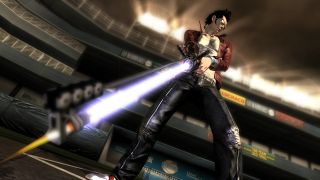 I've played just enough of Travis Strikes Again: No More Heroes to know that I'll definitely enjoy the final game. During a first hands-on demo during GDC 2018, I dove into some top-down, two-player co-op to guide Travis Touchdown and his new frenemy Badman through a brief chunk of the upcoming Nintendo Switch brawler, bashing plenty of skull-headed goons and beating up a chatty, fourth-wall-breaking boss named Electro Triple Star. The bird's-eye perspective and heavy use of neon in this level (which, unlike the premise of Travis Strikes Again, wasn't themed around any indie game I recognized) gave me flashbacks to Furi's style, while the arcadey pacing and visualized damage numbers evoked a mix of Gauntlet and Diablo. And it wouldn't be a No More Heroes game if you didn't have to vigorously shake the controller to power up your sword every so often - though it feels a lot less suggestive when you're holding a sideways Joy-Con.

GamesRadar+: Everyone's asking you about a Killer7 remaster nonstop, I imagine. Which is the remaster YOU would most like to see from a company that isn't Grasshopper?

Goichi Suda: A recent example of one I liked would be Burnout Paradise Remastered. I really like Burnout, so there's Burnout Revenge, Burnout 1, 2, 3... I'd like all of them to be remastered as one package. I'm so used to thinking about my own games that it's hard to get out of that mindset... Ah! Bully! Rockstar! I would love to see them make a remaster of Bully. I'd love to play it on modern hardware. I love open-world; that size of open-world is a great size. Bigger sizes like Red Dead are really cool too, but that small-town feel is something I really like. It's just like how Travis lives in the small town of Santa Destroy - it's that same feeling.

Is Bully your favorite open-world game of all time?

No, no... Red Dead Redemption. That was an amazing game. I'm really looking forward to Red Dead Redemption 2 coming out. I'm also praying that the release timing for that and Travis Strikes Again are not similar. [laughs] The styles are different, but... you know.

Is there any indie game that you really wanted to get into Travis Strikes Again, but you just couldn't work it out for whatever reason?

Pretty much everybody we've talked to has been really receptive and open to doing it. [To answer your question,] it's less a matter of them saying "no," more a matter of having not talked to them yet, but Superhot. I love Superhot, and I want to reach out to those guys and see what we can work out.

Do you think you'll try to add more game tie-ins after the launch of Travis Strikes Again?

It might be difficult to do some updates after launch, but we do plan on having some cool DLC, so maybe in conjunction with that we could find a way to put in new stuff.

Is there any significance to the acronym TSA being the same as the airport security that everyone seems to hate?

[laughs] Not at all. Right now I'm thinking maybe we should have gone with TSB, Travis Strikes Back, but... eh. Up until now, no one's ever changed the name of their game after it came out, so we might be the first ones. I might want to challenge that. As soon as it comes out, I might look at the cover and it's "Travis Strikes Back" and not "Again." Like, "Wait! It's a different title!" Maybe with a sticker. [laughs]

Do you think the pulled-out, top-down view affects the feel of the violence in the game?

It's less about the perspective or where you put the camera, and more about the fact that this time, the game is a game within a game. It's not about assassins killing one another, and everything that goes along with that. So because the style's a little bit different, that's probably where the portrayal of violence ends up being different.

Travis Touchdown resonates with a lot of older players, but how have younger players responded to him?

Actually, I'd love to know. I don't really know. In one way, that's part of the reason why we did the collaboration: work with these cool young indie creators, maybe get fans of their game interested. [chuckles] Hopefully they'll fall in love with Travis like older gamers have.

Do you think Switch has become the premiere console for indie games in general?

I'd love for that to be the case. The thing is, most creators grow up playing Nintendo. And there's a special relationship between a lot of players and creators and Nintendo. So having a game that you create coming out on a Nintendo system is something of a dream come true. It's like you've made it, in a way. So if this is the pattern and the cycle, it's a great thing, and I'd love to see more of it. Even as a creator, just being able to create and release games on Nintendo is a cool feeling. I hope that in the future this grows and grows for Nintendo, as people have this special attachment to it as gamers.