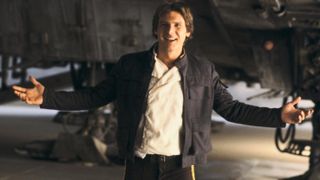 Han Solo is going racing. The Han Solo movie recently had shots of Han on set and in costume, and concept art of a speeder leaked but now we’ve got the real thing in action: Han Solo in a speeder. See the video for yourself below.

Making Star Wars reported on the video which, according to one source was part of the crew “filming some sort of drag race with odd-looking vehicles.” Yes, the speeder’s going pretty slow (the Kessel Run in under 12 parsecs, this ain’t) but I’m sure movie magic will spruce it all up in the final version. You can even catch a glimpse of the racer’s design, a vehicle that looks like some sort of space lowrider crossed with the rebellious coolness of an American Grafitti scene. Perfect for roguish types like Han, then.

It’s still interesting to see racing make its way back into the Star Wars universe, especially as podracing was one of the few rare bright sparks in The Phantom Menace. And there’s no better way to introduce Young Han Solo to the world than a death-defying drag race (or escape, knowing Han) through a backwater planet or dusty crime-ridden ‘burg. Colour me excited.