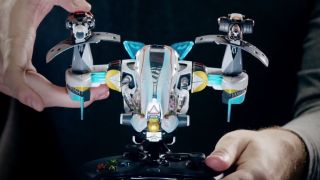 Ubisoft unveiled an new take on the "toys to life" genre at E3 2017, and its name is "Starlink: Battle for Atlas." Think of it as a shoot-em-up spaceflight game with the aesthetic of Hello Games' No Man's Sky, but with more story and bad guys to shoot. And, of course, the added collection aspect via the toys you can sync up with the game to unlock additional ships.

Starlink will be coming out for Xbox One, PS4, and Nintendo Switch - but if I'm being honest, I think it's a natural fit for Nintendo's console. Take your game, your system, and your toys all on the go.

Also, maybe it's just me, but I feel like Starlink also possesses a certain - at least superficial - similarity to "Pioneer," a game that was uncovered inside of Watch Dogs 2 late last year. If you need a refresher, here's the deal with Pioneer:

In Watch Dogs 2, one mission challenges you to infiltrate a fictional version of Ubisoft so you can leak game assets to the press. The game to which these assets belong is Pioneer, which was/is (according to reports) a very real game. Is Starlink that game? Sure looks like it.