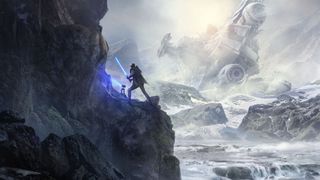 Star Wars is a franchise with limitless potential, capable of broadening the entertainment landscape like no other. Disney has no doubt made mistakes with its handling of the property but if it manages to learn from them, I would wager the best years for Star Wars are yet to come.

Following the release of Star Wars: The Rise of Skywalker, Star Wars fever is fizzling out as we cross the threshold into the next decade, and it’s understandable. Disney has hardly been conservative with its streams of new content but, even as only a casual fan, I’m not fully satisfied with what I’ve been given. It’s worth noting I’m about to spoil some Star Wars Jedi: Fallen Order and movie stuff so read only if you’re up to date on all things Star Wars.

A new hope from an unlikely source

The Star Wars story I've enjoyed the most from the last decade is Star Wars Jedi: Fallen Order, which is a fantastic game. Despite some mechanical flaws, from enemies sinking into solid ground or a lightsaber staying drawn even as it’s hanging from Cal Kestis' belt, I loved every second of my time with Respawn's action-adventure.

As Cal, we get to explore places that have only been mentioned in passing on screen, but were never explored or explained. I hadn't seen The Clone Wars animated series, for instance, so I'd never seen Ilum, the home of the Jedi Temple, and where Padawn go to create their lightsaber. Not until I’d seen it converted into Starkiller Base at least, but it felt like an important place; somewhere any Star Wars fan should recognise and feel a connection with. After exploring it as a runaway Jedi, however, its importance makes total sense.

Getting involved with the characters directly also allowed me to understand the lore in a more intimate way. Thanks to Fallen Order, I've experienced first hand a little bit of what it means to be a Padawan without their Master. I've duelled with Inquisitors, explored long lost planets, and been chased across the galaxy by crafty bounty hunters.

To me, Star Wars was always just another film franchise, but Fallen Order has made it feel like more than that. It’s a universe that's famously far, far away, yet feels like it could be right next door. It's also something that I now feel like I’ve been directly involved in; single handedly repelling the Empire is power and immersion that film or TV could never provide.

The future for Star Wars

Imagine a world where video games, movies, and TV combine to create a story so large and impactful, with so many characters and story arcs that it makes Game of Thrones look puny in comparison.

Say you’re watching a movie, for example, and find a character that is super interesting but given minimal screen time only to find they’ve got an entire game dedicated to their backstory, thus enriching their presence in the movie that you literally just watched. Well, now you have to go and watch the movie again to see if there’s anything else you missed.

Project Luminous, the next project based inside the Star Wars universe, looks to be my light at the end of this long and dimly lit tunnel. With speculation showing that a game could lead the charge into the next chapter of Star Wars, I am more than ready to jump in, especially if Respawn’s name is anywhere on the box.

Indeed, Respawn’s already hiring for a new Star Wars project following the commercial success of the first. Rather than a direct Fallen Order sequel, though, an entirely new game could be exactly what's needed to pioneer the jump to hyperspace into next-gen Star Wars territory.

12 Star Wars Jedi: Fallen Order tips to awaken the force in you

Having said that, after Cal split the holocron in two and looked around at the tiny crew we’d managed to gather, I wouldn’t be entirely mad about another game based around the adventures of this weird bunch. Nightsister Merrin, for instance, represented a fascinating character not given anywhere near as much time in the spotlight as I would have liked.

In fact, any character that’s not just some human person with a blue lightsaber would be great. Give me a Nightsister Merrin game, or anything where I’m playing a crazy looking alien with a lightsaber-wielding tail rather than another visually blank slate like Cal Kestis. Slightly harsh criticism aside, Respawn has continued its immaculate record of developing stellar stories that began with Titanfall 2, and I have a gut feeling that this streak is far from over.

Not only that, but rumour has it that The Mandalorian season 2 could feature the return of Star Wars Battlefront 2 protagonist, Iden Versio. The Mandalorian was the saving grace of Star Wars' 2019, introducing characters that we’ve already fallen in love with, and lore that most viewers will have never encountered before.

With all this potential, the stage is set for Star Wars to launch something greater than the sum of its parts, which is what the franchise has always been about. The best way for Disney to break into new Star Wars is by means of video games and it certainly feels like there is a possibility that the team over at Disney came to the same conclusion. For now, Disney Plus is going to have to tide us over until some more hard-hitting, lightsaber swinging action is delivered to us in game.

For more, check out the best Star Wars games to play right now, or watch our latest episode of Release Radar below.