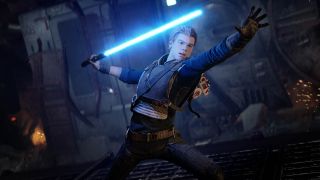 Star Wars Jedi: Fallen Order finally lets fans play out their dreams of Force-powered lightsaber duels in a modern video game, but Lucasfilm wasn't initially sold on the idea. Game director Stig Asmussen explains in the latest episode of the AIAS Game Maker's Notebook podcast that Lucasfilm wanted his team to create a very different kind of Star Wars game - and though they stuck with their vision, he doesn't blame Lucasfilm for being hesitant.

Before Fallen Order, Asmussen was best known for his work on the melee-action driven God of War franchise. When he got the opportunity to work on a Star Wars game, making a lightsaber-focused game was barely even a question for him. But It was for Lucasfilm.

"I pitched, 'Hey, what if we do a game about Jedi and Force powers?' And they were not super comfortable with that. They kind of threw it back and were like, 'What about blasters, and maybe bounty hunters?' I was like, that's not the background of the team that we built. You might as well ask us to start building a racing game at this point. I don't think anybody's really gonna be happy with the results of that.

"What I came to learn and find out is that, for them, the Jedi is the Holy Grail. To make a game about Jedi, you've gotta earn it. There was a little bit of a back and forth but they could see where I was coming from. So they said, 'Alright, we can start having a conversation about making a game about Force users. But not Jedi.' Then the game comes out and its name is Jedi, so obviously there was a big relationship that needed to be built there."

Asmussen didn't say anything about this, but Disney also may have been surprised that Respawn - the Call of Duty pedigreed studio known for slick shooting action - came back with a melee Metroidvania concept. Granted, Asmussen had started an all new team within the studio, but shooter games were still Respawn's entire reputation. I wonder what a bounty hunting Star Wars game from the Titanfall team would have looked like? Anyway, Asmussen said most of the disagreements his team had with Lucasfilm came early on as they were still trying to build that relationship.

"They own the license. It's their responsibility that we stay in line and play by the rules," Asmussen explains. "At work I might be like, 'Yeah, I spoke with Lucasfilm and they gave us a hard no on this one thing.' Why? Why can't we do this?' Sometimes we didn't get a very good explanation, and that's because they couldn't tell us why. Which is a very fair response when you're working with such a big franchise."