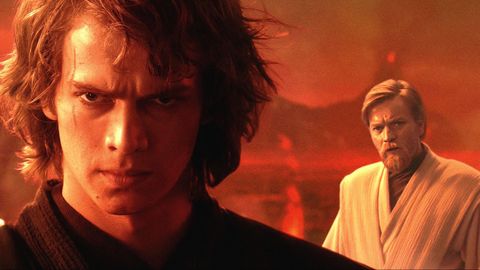 Flawed but enthralling, Star Wars’ darkest hour sends the saga home on a high. So long, and thanks for (virtually) all the Sith.

Betrayal, anguish, death. As Anakin puts it: “This is where the fun begins!” After the Midichlorians, taxation, Jake, Jar Jar, and juvenile romance, Star Wars gets seriously entertaining with Sith. Revenge is indeed sweet.

And, yes, pretty damn dark. Perversely, though, for all the pain and suffering and severed limbs, Episode 3 is a superb sugar-rush of summer entertainment. Galaxies ahead of The Phantom Menace and Attack of the Clones, it replaces the early prequels’ plod with pace, passion, and purpose. The reason for this upswing in storytelling? Simple: this time, there’s a story to tell. The spine-tingling thrum of the credits and the traditionally risible opening crawl fade out and we hit the ground sprinting, with a swashbuckling space rescue that winningly recaptures the matinee-serial spirit of the original trilogy, all close calls and cliffhanging. The scale snares the breath, the drama delivers; hell, even the droid slapstick comes off.

Soon, storm clouds are gathering. Anakin’s conversion to the Dark Side is sure, but why will the ‘Chosen One’, the man supposed to bring balance to the Force, turn so violently against his mentors? Because – blame the bloody intergalatic NHS – you can’t get a decent midwife for love nor money. Plagued by nightmare visions of Padmé (Natalie Portman) carking it during childbirth, Ani has compelling motivation: only Sith-power, so it’s said, can bring loved ones back from the dead. His rush to hatred and all-out wickedness does slightly strain credibility, but the ease of the seduction is offset by the sly skill of the seducer. Sidelined in previous prequels, Ian McDiarmid feasts upon his moment in the spotlight. As Chancellor Palpatine, his insidious line readings pump up the sit-down scenes with suggestive menace. And when it’s time to party like it’s 1983, the hamming couldn’t be more succulent (“Power! Un-LIM-ited power!”).

As for Christensen, he manages to shrug off much of Clones’ preening petulance with a new, focused intensity. You do feel sympathy for the devil – one moment of silent tearshed is as moving as a binary sunset. Involving work, too, from Ewan McGregor, more comfortable than ever.

The design johnnies, meanwhile, have similar fun: a proto-X-Wing fighter here, a Leia of lipgloss on Padmé there. Sadly, no chance of a return to stop-motion – ILM max out on CGI like never before, the frame-filling digi-detail making it hard to keep up with all the planet-hopping. And while we’re on the quibble, what about the blink-and-you’ll-miss-it Wookiee-world? And the multi-saber toting General Grievous, who proves about as malicious as a toaster? Also – no surprises – the dialogue stutters: Lucas can still type this shit, but the actors still can’t say it. Kudos to the Bearded One, though, for injecting a strain of political pertinence, with a handful of loaded lines resonating beyond the multiplex walls.

As ever, it’s the visuals that carry the full force of Lucas’ yarn-spinning – the final act sees him cross-cutting with a panache worthy of his old mentor Francis Ford Coppola. The jaw-flooring finale nips between two duels and then, with pure poetry, from one pivotal birth scene to another. Yes, the suited-and-booted riiiiiise of Vader is a bit camp, but it’s still a thing of terrible beauty. Still a myth-making moment worth waiting for, all these years after he marched into our lives and changed cinema forever.

So here we are then, at the end of the road – or rather back at the beginning. Sure, the journey wasn’t always smooth, but the destination was worth it. First among prequels by a mighty stretch, Revenge of the Sith recaptures the magic of the franchise. Tragedy, majesty, adventure, excitement: this is a fine way to close the curtain on a pop-cult phenomenon. It’s a Star Wars film worthy of the name. And the icing on the cake? Jar Jar Binks: seen, but not heard.

Flawed but enthralling, Star Wars’ darkest hour sends the saga home on a high. So long, and thanks for (virtually) all the Sith.