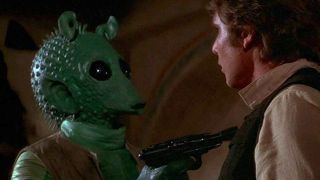 In a galaxy far, far away... you know how the rest goes. Except, maybe you don’t. Thanks to a host of small (and mostly insignificant) Disney Plus Star Wars changes, there is plenty new about the original Star Wars trilogy – A New Hope, The Empire Strikes Back, and Return of the Jedi. We’re about to round all the Disney Plus Star Wars changes up, including that Greedo scene, a whole new intro before the opening title crawl, and even a very different look for each movie.

The Han and Greedo scene

This is the big one: did Han shoot first? The original release had Han kill Greedo before the alien got a chance to shoot his shot, as it were. It was the ultimate introduction for a swaggering mercenary who preferred to have his blaster do the talking. That was changed to Greedo shooting Han in a 1997 Special Edition re-release, which has been kept in releases ever since.

In the new 4K version of A New Hope available on Disney Plus, his showdown with Greedo in the cantina has been altered slightly. As you can see from the comparison video below, Greedo still shoots first but Han’s shot comes even sooner after the original attempt to kill him.

Well, they've done it again. #DisneyPlus appears to have altered the infamous Han and Greedo scene from #StarWars. See for yourself. pic.twitter.com/6aGqwoOrzFNovember 12, 2019

Another Greedo change. This time, just before firing off a shot, he says something that sounds like “Maclunkey.”

So, what gives? Disney told The Verge it was a change “made by George [Lucas] made prior to the Disney acquisition.”

So, it appears to be a new edit from George Lucas that has only now seen the light of day on a wider scale. The lack of subtitles for the line – as Greedo speaks Huttese in the scene – only makes it stand out more, but it’s ultimately only a minor change.

The iconic 20th Century Fox fanfare, which preceded original showings of the Star Wars trilogy, has been restored for its Disney Plus re-release. The Fox logo and trumpets were removed when Disney bought LucasFilm.

Thankfully, this one isn’t anywhere near as controversial as the Greedo changes – and might even get some nostalgia points from the older crowd. Fun fact: George Lucas made sure the opening Star Wars crawl music was in the same key as the Fox fanfare so that the two would seamlessly blend into each other. On some of the first pressings of the Star Wars soundtrack on vinyl, the Fox opening was the first track.

There’s even a new intro – and one you might already be familiar with if you’ve already watched The Mandalorian premiere.

It’s added as a tag on all Star Wars shows and movies on Disney Plus and lasts just 20 seconds. The new intro features red and blue flashing lights, with iconic characters such as Darth Vader, C-3PO, R2-D2, and even The Mandalorian flashing up on-screen. It even comes bundled with a snazzy new Lucasfilm logo.

This is low-key the most important change to the original trilogy. The new 4K versions found on Disney Plus are seemingly new scans, which make slight corrections to contrast, picture quality, and colour throughout each movie. Check below for an example – and get prepared to see Star Wars in a whole new light. Again.

I can officially confirm these ARE new scans: pic.twitter.com/oQiF41Unz2November 12, 2019

Other re-release changes are still intact

The 2004 DVD re-release (and prior 1997 Special Edition) added several changes that are still widely derided by fans. Hayden Christensen replacing Sebastian Shaw as Darth Vader’s Force Ghost, Darth Vader’s meme-worthy “Noooo!” in, and a CGI Jabba inserted in A New Hope were among the most controversial decisions made by George Lucas.

Unfortunately for some, all of those tweaks are still intact in the Disney Plus versions. If you don’t know any better, it’s not a huge deal. If you’re curious as to just how much was changed, however, the Wikipedia page for re-release changes is a good a resource as any when it comes to covering everything.

While you’re here, why not check out the best movies on Disney Plus. You can sign up to Disney Plus here, complete with a seven-day trial.