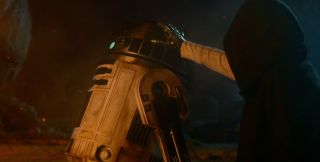 Back when Star Wars: The Force Awakens was still 18 months from setting box office records, a report claiming that the film opened with a severed hand clutching a lightsaber made its way to the web. The outlandish-sounding sequence didn't make it to JJ Abrams' final cut, but Luke Skywalker himself Mark Hamill confirmed to The Sun (via Birth.Movies.Death.) that The Force Awakens was meant to open a little differently:

"I can tell you now that in the original opening shot of 7, the first thing that came into frame was a hand with a lightsaber, a severed hand that enters the atmosphere, and then the hand and bone burns away and goes sticking into the surface of Jakku, and this alien hand comes in, don’t know if it was Maz but it was an alien hand who takes the lightsaber way, and then the movie proceeds as you see it".

During Episode VII it's revealed that Maz Kanata does indeed have Skywalker's lightsaber - which finds its way back to the legendary Jedi by the end of the film - but Lupita Nyong'o's character chooses to save the story of how she acquired it "for another time". It's probably safe to assume that director Rian Johnson and co will fill in the blanks in the more Skywalker-heavy Episode 8 next year.