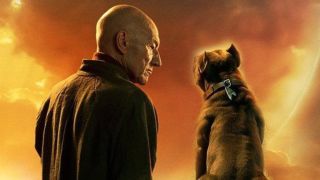 Star Trek: Picard hasn't even debuted yet, but CBS already wants more. According to Deadline, the Patrick Stewart and his pit bull show has already been greenlit for a 10 episode second season, ahead of the show's debut on January 23. The second season has already received $20.45 million in California tax incentives, the most any small screen project has ever received.

The series picks up years after we last saw Jean-Luc Picard - the former captain of the USS Enterprise has retired and lives on what looks like a lovely vineyard with his adorable pit bull terrier. But when a woman shows up on his doorstep begging for help, Picard returns to the fray, reuniting the gang to help him save the day. Yup, that means Star Trek: Picard will give us Commander William T. Riker (Jonathan Frakes), Seven of Nine (Jeri Ryan), Data (Brent Spiner), and perhaps some other iconic cameos.

Joining the familiar faces are Harry Treadaway (Mr. Mercedes) as a Romulan Agent, Allison Pill (The Newsroom) as Dr. Agnes Jurait, and Isa Briones as Dajh, the mysterious woman who needs Picard's help. At the Star Trek: Picard panel at New York Comic Con 2019, executive producer Heather Kadin said, "We only brought people back if their story really mattered to the story we were writing." It looks like this mix of old and new characters hits all the right notes, since the show is already set for a second season, more than a month before its debut.

Star Trek: Picard will debut on January 23, 2020, with a new episode dropping weekly on CBS All Access. Sources told Deadline that Season 2 could begin production as early as spring 2020. Wherever you are in the world, we can tell you how to watch Star Trek: Picard online.