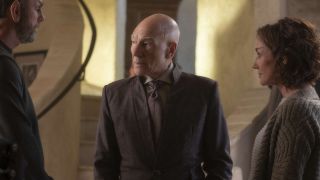 For the first time in 18 years, Patrick Stewart settles back into the comfy captain’s chair where he made his name as Starfleet captain Jean-Luc Picard. But does Star Trek: Picard hold up, or is it an engagement too far for the Trek veteran? If you want a quick peek at the critical consensus, we’re here to make it so with our Picard review round-up. Grab a cup of Earl Grey and see if the CBS show lives up to expectations, starting with an excerpt from our very own review of the premiere.

Rather than simply being Picard’s last hurrah, the show is going where no Trek has gone before – a totally satisfying evolution of the Next Generation story. And make no mistake, Picard is a show made with TNG fans in mind. Nods to the show are everywhere, from the numerous mentions of Earl Grey, to a model of Picard’s first command... Is it accessible to Trek newbies? Despite the writers’ best efforts to keep everyone up to speed, it does assume a lot of prior knowledge, so having Memory Alpha on hand could be helpful. That said, the show’s called Star Trek: Picard, so you can’t say they didn’t warn you.

Star Trek: Picard struggles at times to fly true in its first three episodes. Attempts to marry the sensibilities of big-screen (specifically, Kelvin timeline) Trek with those of its TV counterpart create discord; there is a slickness to the pilot, particularly in the big action set pieces, that doesn’t quite jibe with the more pensive nature of the small-screen franchises. But veteran TV director Hanelle M. Culpepper, who helmed the first three episodes, eventually settles into a more familiar speed, one that allows each new discovery to land before moving on to the next.

Stewart’s compelling enough to justify a relatively leisurely pace in the early going. There are a lot of new characters to introduce, and new circumstances for Picard, the Federation, and the Romulans. But it all feels cohesive and confident in a way that Discovery even in its good moments never quite has. (Nor, for that matter, did most of the previous spin-offs in their first seasons.)

Far be it for a casual fan like me to compare Star Wars and Star Trek (even if J.J. did it first), but seeing Jean-Luc again reminded me of seeing Luke Skywalker at the end of The Force Awakens. Just glimpsing the aged face of a pristine, unquestioned hero from yesteryear was enough to bring back childlike memories of simpler times, when shades of gray never reached the silver screen’s bigger-than-life heroes. Picard made tactical errors and a few other blunders in the past, but he’s still a mythic persona; a hero from the time of heroes.

Yet even more satisfying than pretending like perfection is attainable for those unimpeachable figures was seeing Luke’s weakness in The Last Jedi. Without spoiling anything, let’s just say there’s an opportunity in Picard for Jean-Luc to legitimately consider if he made a mistake, if his best intentions don’t actually reflect the best choice — or even if an old white guy like him should be the guiding moral principle for future generations.

No rating given – Cnet – Richard Trenholm

Striking a balance between new story and continuity is tough when rebooting a show after such a long absence. Nemesis was 18 years ago, and The Next Generation finished back in 1994. Even the biggest fan could be forgiven for letting some of the details slip their mind. So it's a bit of an odd choice to lean so heavily on Nemesis -- a film that surely nobody is rushing to rewatch -- and a single episode from way back in TNG's second season. Still, new viewers shouldn't be put off as the fan-pleasing easter eggs don't get in the way of the adventure's forward motion