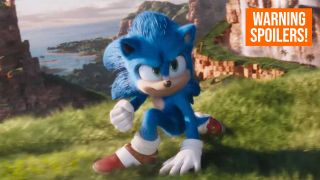 The race has been run. It’s over. But while the Sonic movie may have spin-dashed to a fairly sage finale, the ending leaves more open for debate than you may have realised. Look a little closer, and it appears that there are several breadcrumbs that all point towards a sequel.

Below, we’ll not only recap the final scenes, but also zero in on the posers that threw us through a loop once the credits had finished rolling: Robotnik’s fate, a potential [SPOILER] tease, and *that* Sonic movie post-credits scene.

But warning... spoilers for the Sonic movie follow! Bookmark this page and come back after you've seen Sonic's first big-screen adventure.

Sonic movie ending: what happens in the final scenes?

There’s no better place to start than, uhh, at the end. Sonic does that, too, by giving us a preview of the ending in the opening two minutes. We see part of the closing scenes as Sonic and Robotnik race through San Francisco. That’s after the spiky hedgehog regains his bag of rings, used to open portals to new worlds and locations.

Before that, Robotnik has Sonic, Tom, and Tom’s wife Maddie cornered at the top of a skyscraper. Sonic hatches an ill-advised plan to escape by pushing Tom and Maddie off the building and opening up a ring portal. However, he loses his rings (Sonic fans know that pain all too well) and scrambles around to collect them. He eventually grabs one before Tom and Maddie hit the ground and opens a portal for them to teleport to a farm in Green Hills, Montana.

Then, the finale really ramps up. Robotnik chases Sonic through several portals and ends up back in Green Hills. After a brief battle, Robotnik gets the upper hand. Tom, though, gives an impassioned speech about friendship, distracting the super-villain long enough for Sonic to speed behind the egghead, open up a ring portal to a mushroom-only planet, and send Robotnik hurtling through it.

Some time later, Tom and Maddie make the decision to stay in Green Hills instead of Tom taking the big-town job with the LAPD – and they have a surprise for Sonic. They’ve converted their attic into a room for Sonic, complete with all the toys and trinkets found in the cave he had been hiding out in for a decade.

The last shot of the movie sees Robotnik – in his classic rotund Eggman look with bald head and thick moustache – trying to make his way off the mushroom planet. His only companion? Agent Stone. Except this Agent Stone is a literal rock. Still, it looks as if the mad scientist is making some progress on getting back to Earth…

Finally, if you stick around, you’ll be treated to a quick post-credits scene. In it, Tails is seen flying through a portal (presumably from the Green Hill Zone, though it’s not made clear) and tracking Sonic with a device. He flies towards Green Hills as the film cuts to black.

How is Robotnik getting back to Earth?

Robotnik isn’t exactly a fun guy – so how is he going to escape from a world filled with mushrooms? He’s actually doing… surprisingly well. He has several devices seemingly notched to his belt, and that 300 IQ intellect certainly isn’t going anywhere, even if his hair has.

Things are all set up nicely for him to return in a sequel (or a threequel, if they want to bypass Robotnik next time round in favour of another villain). It wouldn’t be a surprise to see the mushroom planet not being totally uninhabited, or someone could have left a ring there in the past. Worse still, Sonic might go and rescue him if he’s faced with an even greater threat.

What does the government want with Sonic?

In the games at least, Sonic and government-led forces have a pretty love/hate relationship. Most famously, Sonic Adventure 2 saw the military-like GUN chase after the blue blur through a city, and it wouldn’t be a surprise to see him fall into their clutches once more.

For now, Sonic is safe under Tom’s wing. The general who appeared on his doorstep at the end was fooled into thinking Sonic was nowhere to be found – but what do they want with him?

A simple spot of experimentation would be a good a guess as any. Harnessing that sort of energy would be priority for all sorts of top-secret goings-on in the armed forces. Maybe they even have a scientist tucked away somewhere working on building a metal version of Sonic?

Who is Long Claw and what happened to her?

Don’t go scouring through old comics and Genesis games. You won’t find anything on Long Claw, the owl who mentors Sonic in his early years. She’s an entirely original creation for the film.

What happens to her is a lot more unclear, however. We can assume, with her having pushed Sonic into taking the portal to Earth, that she died before Sonic could race back and save her. But there’s just enough wriggle room there for her to return if need be in a sequel. After all, why go to the trouble of setting a character up for only a very brief scene? Speaking of…

Yep. Long Claw and Sonic are chased down by tribal echidnas. The race, which counts Knuckles among its members, are seen wearing masks and facepaint in the Green Hill Zone. If nothing else, it’s a neat little Easter egg – but could be laying the groundwork for a Knuckles appearance down the line. But their preoccupation with Sonic is odd, unless he has something to do with the Chaos Emeralds.

How has Tails tracked Sonic?

If the games have taught us anything about Tails – other than being the character you pawn off to your friends in favour of playing as Sonic – it’s that he’s a tech whizz. He could probably whip up a device that zeroes in on Sonic’s new location across time and space fairly easy. The small matter of why it took Sonic’s BFF around a decade to find him, though, remains a question perhaps best left for a sequel.

What's next for Sonic?

For now, Sonic’s life is relatively stress-free. He’s got his mountain of comics to whip through, no Robotnik, and a comfy home life. He’s even got brand new sneakers! But, if the Sonic movie makes bank, a sequel story will have to be dreamed up.

Thankfully, Tails’ presence in the post-credits plants a seed. Whatever he’s there for will undoubtedly tie in to Sonic’s return, as well the echidnas’ presence earlier in the film. The games also offer up plenty of possibilities: a Robotnik return; Knuckles; Perfect Chaos; Shadow. As long as it doesn’t involve were-hogs and smooching princesses, I think any of those can work.