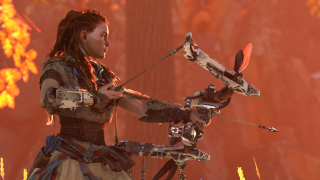 Oh, you Horizon: Zero Dawn players - you sure like killin' things. Over on Twitter, game director Mathijs de Jonge gave some interesting stats regarding how players have spent their first couple weeks with the game. The answer is, of course, by making a whole lot of robot dinosaurs become dead robot dinosaurs.

Within one week, you took down more than a million Thunderjaws and more than 152 million Watchers. That's almost seven Wpm (Watchers per minute) y'know. After two weeks, the tolls rose considerably:

Hot damn, 490 million bandits killed. Truly you are all terrifying serial killers (and I mean that in the best way). It looks like Thunderbirds have been giving everyone the most trouble, as after two weeks, their death toll is still below 2 million. Which makes sense. Thunderbirds will mess you up.

These numbers are bound only to rise even further, especially considering the fact that developer Guerrilla Games is hard at work on Horizon DLC.

But perhaps the most impressive number is this: 2.6 million. That's the number of copies Horizon has now sold worldwide, making it the best-selling new IP for PS4 from a first-party developer to date.

Congrats to Guerrilla Games, and let the slaughter continue.