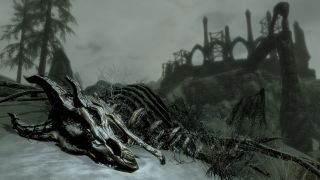 The Elder Scrolls V: Skyrim's new DLC, Dragonborn, will hit Xbox Live tomorrow--but the big news is where else it's landing. Bethesda today confirmed on its blog that Dragonborn will release on both PC and PlayStation 3 in early 2013, hopefully bringing an end to months of delays for PS3 players.

Bethesda didn't address when or if Dawnguard and Hearthfire (which made their way to PC after Xbox-exclusive launches) will arrive on PlayStation 3, commenting only that it has "more in the works" and will share details soon. The PS3 DLC has seen setback after setback owing to performance issues on the console, though the developer tweeted earlier this month that the standstill may be coming to an end.

Meanwhile, if you just can't wait a day to find out more about what awaits on the island of Solstheim, The Outhousers has posted a generous helping of content supposedly leaked from a beta tester. We won't go too crazy on speculation since the DLC is already beating on our doorsteps, but chief among the leaks is an achievement which confirms tameable, rideable dragons are happening.

Riding dragons on all three of Skyrim's platforms within the next few months? Damn it feels good to be a dovahkiin.