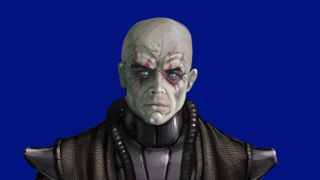 The Star Wars universe is no stranger to the "what if" scenarios proposed by fans. What if the sides were flipped and Luke was a Sith? What if Leia had been the one to receive Jedi training instead of her brother? What if General Grievous wasn't 99% metal? Well wonder no more, because new concept art from the long-ago cancelled Star Wars Battlefront 4 has surfaced, and it's sure to scratch your alternate universe itch.

And no, that's not a typo - this is allegedly concept art from Star Wars Battlefront 4, despite the fact that Star Wars Battlefront 3 never saw the light of day. How can that be? Pretty simple, really: as development on Battlefront 3 was coming to a close, teams were tasked with laying the groundwork for what was thought to be an inevitable sequel. That proved to be a fatal gamble when the shutdown of LucasArts put a damper on future plans, and developer Free Radical was closed shortly thereafter.

Back to the pictures: there are few concrete details about the direction BF4's plot would've taken, but you can tell it would've dramatically altered the way we see some of Star Wars' greatest heroes and villains. For example, here's a Dark Side version of young Obi-Wan, as well as the absolute beast he would become as a grizzled old man:

And here's a look at what the great hero Luke Skywalker would look like as a Sith:

The concept artists also imagined several takes on Vader, including two versions of a "redeemed" Sith Lord and even what he'd look like if he usurped Palpatine as Emperor:

Darth Maul, meanwhile, could've made for quite the dashing good guy if he didn't have tattoos all over his face:

Side characters also got their due; Mace Windu looks cool as hell, corrupted(?) by some sort of purple crystal in one incarnation:

While here we see what General Grievous looked like under his mask (and before he was turned into a cyborg):

Had Han Solo not rescued everyone's favorite walking carpet, Chewbacca would be a little more prone to pulling off your arms - and scalp:

But really, the character that seems to have gotten more attention than anyone else is Leia. Concept art envisions her both as a Jedi and as a Sith:

It really is too bad that we'll never see these twisted versions of established characters in Battlefront 4 or likely any other media. But, maybe it'll give you the inspiration to write your own Star Wars fanfic? Hey, if "what if Obi-Wan, but evil" can look as cool as he does, why not give it a try?

To see the full art dump and even more characters, check out this Imgur gallery.