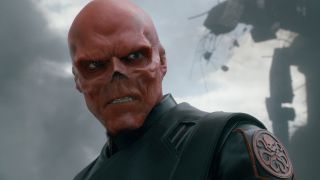 All right, Marvel fans, it’s time to rev up your speculation engines. Samuel L. Jackson may have just hinted that one of Captain America’s biggest, baddest villains - The Red Skull - may be coming back to the Marvel Cinematic Universe.

In an interview with Hot 97, Jackson was asked if he was going to appear in Marvel Studios’ upcoming Black Panther movie, and he responded, “No! They’re not letting my black ass go through Wakanda. I was trying. I asked. I was like, ‘What do you mean?’... You didn’t see me in Civil War, I’m still out there trying to figure out what the Skull is doing…” At that point, he trailed off while the interviewer asked another question, so here’s where those speculation engines will come in handy: do you think Jackson was talking about the Red Skull in that remark?

A return certainly wouldn’t be outside the realm of possibility. Hugo Weaving played the crimson-faced baddie way back in 2011’s Captain America: The First Avenger, and the last we saw of the character, he exploded into bright light after directly touching the Tesseract (not your smartest decision, dude). But considering the Marvel Cinematic Universe’s many fake-outs when it comes to character deaths (including a prominent bait-and-switch featuring Jackson’s own Nick Fury in The Winter Soldier) and the fact that the franchise dipped its toes into the magical realm recently with Doctor Strange, it seems likely that some smart screenwriter could devise a logical method of resurrection for that character should he be needed to cause some more on-screen destruction in future films.

So the question then becomes: do you want to see the Red Skull make a triumphant return? The MCU has had a villain problem for years, and I feel like bringing this one back from the dead for a second shot at world domination might actually be a good opportunity to make him a stronger character. If they pull it off, it might retroactively make The First Avenger a richer movie (not that it needs a ton of help, but let’s face it - that film isn’t anyone’s favorite Marvel Studios film anymore). What do you think? Sound off in the comments below.