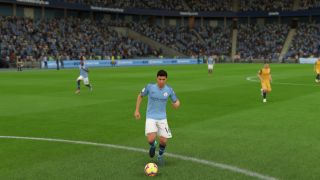 Manchester City have splashed big money this summer to bring one of Atletico Madrid’s star players to the Premier League, so what do the Rodri FIFA 19 stats tell us about his immediate future alongside Bernardo Silva and Raheem Sterling?

Firstly, City are getting a player of similar calibre to Bruno Fernandes FIFA 19, who’s been linked with rivals United throughout the summer, in both FIFA 19 and real life. There are three Rodri FIFA 19 items available, with ratings of 82 (his standard card), 83 (Champions League card) and 88 (FIFA 19 TOTS card). It’s the 82-OVR standard card we’ll hone in on for the purposes of this feature.

The Citizens spent 70 million Euros on prising the 23-year-old away from his home nation, and according to FIFA 19 they’re getting a player boasting attacking prowess and an impressive engine. Rodri scores 81 for both vision and short passing, and 86 for stamina, making him a threat for the entire 90 minutes. He could do with fine-tuning in front of goal, though: attributes for finishing (68), shot power (76) and volleys (59) all underwhelm.

Pep Guardiola’s new charge will also need to do some work when it comes to set-pieces according to FIFA 19. Rodri scores 54 for free-kick accuracy and 46 for penalties, so City of Manchester Stadium season ticket holders will be hoping to avoid shootouts when it comes to next year’s Champions League knockout stage.

As for swiftness, the Rodri FIFA 19 base card has 70 acceleration and 66 sprint speed for a pace rating of 78. More encouragingly, his overall potential in career mode is a lofty 88.

The Rodri Football Manager 2019 ratings – remember, these are out of 20, rather than 100 – are strong across the board. His best is positioning (17), with tidy scores of 16 for teamwork and anticipation. Then follows a host of 15 ratings: first touch, tackling, concentration, decisions, and stamina. That feels a bit more like the player that City paid mega-Euros for.

Happily, his real face is already in the game, so the FIFA 20 Rodri card won’t be one that requires a new headscan to look accurate on the digital turf.