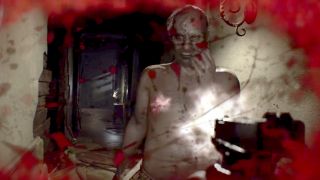 Anyone worried that guns might be overpowered only have to watch this to see how clumsy and unwieldy it looks. I do not feel safer. The lack of aiming means having a weapon is far from helpful - like the original game's tank controls, and Resi 4's inability to move and shoot at the same time, number 7's found a way to create an in-game vulnerability to hamper the player, which is perfect for the series.

One other thing to note is Jack, one of the game's main villains, being taken down. It suggests that there might only be a few key enemies that can only be knocked out, Nemesis style, before waking up and continuing pursuit.

The second video finally shows how healing works. We knew herbs were back but not how. This shows them being combined with 'chem fluid' to make a soothing balm. Perfect for disinfecting axe wounds...

Interestingly Resi 7 pre orders have separate herb and chem fluid packs suggesting this isn't the only way these ingredients can be used. My guess would be a The Last Of Us style system where things can be used defensively or offensively, depending on what you need.

We've only got three more of these on the way as the current run is numbered 1-10. Given the increasing level of gameplay reveals as the series has progressed I suspect we're going to see some pretty big stuff in the final three.