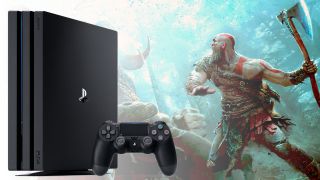 Two of the best PS4 exclusives in one PS4 Pro bundle? Why didn't you say so! This hot off the press Amazon Prime Day game deal is offering Days Gone, God of War and a 1TB PS4 Pro for just $350. That's a 25% and $114 saving on what the same bundle would usually cost, making it quite the steal.

You can't fault the choice of games either. God of War is generally regarded as a damn masterpiece, and Days Gone - only released in April - is a Sons of Anarchy/The Walking Dead mash-up that will keep you killing zombies for weeks. All that and a console that can deliver 4K entertainment, HDR technology, and even PSVR? What are you waiting for?

PlayStation 4 Pro 1TB Console with Days Gone and God of War Bundle | $350 on Amazon
The PS4 Pro is an impressive machine on its own - 4K technology, HDR visuals and VR ready - but the addition of two of the best PlayStation exclusives makes this bundle really stand out. View Deal

If you haven't invested in a 4K TV yet, or you're just not bothered about 4K technology, you can also grab a great, even cheaper bundle for a new PS4.

If you don't already have a PS4, now is the time to get one. Just remember, you have to be an Amazon Prime subscriber to take advantage of the hottest Amazon Prime Day game deals. Don't fancy signing up long-term? No problem. We'd advise using the free trial and then cancelling your membership once the event is over.

Did you miss the Amazon deals? The Black Friday PS4 offers are coming in November!