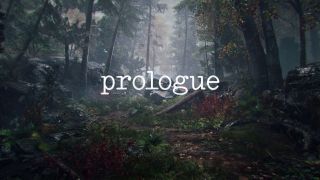 It's only 30 seconds long and doesn't give very much away at all, but it looks like we've had our first peek at PlayerUnknown's next big project.

The scene takes on a first-person POV in which your anonymous protagonist takes shelter from a storm, nervously scanning the treeline as the barks and growls of angry search dogs get ever closer.

Here, take a look below:

You'd be forgiven for wondering if the teaser was even legitimate – the YouTube account carrying the trailer was only created on December 12 (just in time for the Game Awards) and, as yet, remains unverified – but Prologue has since been confirmed as a new game from Brendan "PlayerUnknown" Greene and his new studio, PlayerUnknown Productions.

"Prologue is an exploration of new technologies and gameplay," state's the game's mini-website. "Our aim with this game is to give players unique and memorable experiences, each and every time they play."

"Thanks for signing up to hear about Prologue," the email states. "We have been hard at work for the past nine months building a team, figuring out what we wanted to do, and then trying to see if we could actually do it.

"Last month, we proved a concept, and that gave us the confidence to show our teaser to the world. The game still has some time to go before we are ready to share more, so please bear with us.

"Before I go, I want to give a shout out to the wonderful folks I get to work with and who will help me deliver some memorable games to everyone. They are some of the brightest, most passionate researchers and developers I have had the pleasure of meeting. And they all are committed delivering to a shared vision, which is, simply, to make great games.

"So, thank you once again for joining us, as we step into the unknown to experiment, explore and create," the email finishes, and is signed off by "PlayerUknown".

“I have been given a once in a lifetime chance to deliver something new on a global stage. Being given a platform to build a brand-new experience outside of the Battle Royale genre is an amazing gift, and one I don’t want to squander,” he added.

Prefer your battle royale on the go? Check out our picks for the best battle royale games to download on iOS and Android right now.