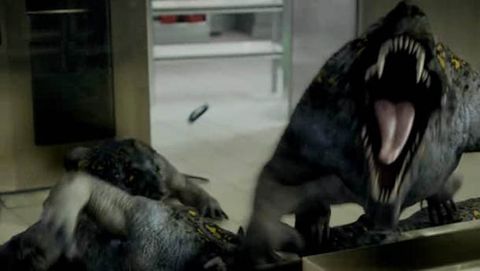 Who let the dogs out? CONTAINS DETAILED SPOILERS

THE ONE WHERE A pack of prehistoric pooches infest a school, while Abby fights against Philip’s decision to put down the animals in the menagerie.

VERDICT There were times during this episode when you wondered whether you were watching Primeval or watching somebody play Resident Evil ( Resident Primeval , maybe?) what with all those reptilian dog-things throwing themselves at the camera, and getting blasted back by Matt and Becker.

Not that this was necessarily a bad thing. Once again, Cilla Ware, who did such a great job on the previous episode, proves that she is probably the best director this show has ever had. She seems to have a natural understanding of what it takes to make the dino-chasing scenes tense and action-packed. The flickering CCTV cameras may have been a convenient dramatic tool (continually cutting out just at the right moments to create suspense) but she used the device to chilling effect. She also pitched the death of the girl perfectly; the scene was incredibly affecting, even though nothing at all was shown. On a pure action/adventure level the episode rates very highly.

Which was lucky, because Ware’s smoke and mirror skills distracted from the fact that the episode was once again slightly let down by a problem that’s continually plagued this series so far: the creature plot line was a little humdrum and formulaic. It was also slightly disappointing that there was little further exploration of what Emily and Ethan are up to, though his kidnapping of her livened up the end of the episode, and promises some exciting developments.

The Abby plot was a bit a game of two halves. Philip is turning into a little bit of a moustache-twirling villain and you have to wonder if Abby’s escape plan was ever going to work (and surely her “contact” with a private zoo is a potentially serious security leak). On the other hand, her sense of desperation was touching, and the friction the situation sets up between her and Connor is logical, if potentially heartbreaking after they’ve seemingly been the perfect couple since their return from the Cretaceous. Lester comes to the rescue, using his political cunning to back Philip into a corner, and it’s always great to see Lester get one-up on Philip.

THE YOUTH OF TODAY Writer Paul Gerstenberger tries hard to give the three teens a bit of character and some funny lines, so congrats for that, but he clearly has no idea how the “Yoof of today” talk. Okay, we didn’t need them saying, “Innit?” after every sentence, but how many kids today outside of a public school would construct a sentence, “Darren, ask yourself one question: outside of a Seth Rogan film, would a girl as hot as me really fall for a tragic geek like you?” It’d be more like, “This ain’t no Sef Rogan film, Dahrun. This is the real world. Hot girls don’t fall for geeks.” Their dialogue was a bit ’70s kids’ TV at times.

BEST BIT The girl getting eaten by the devil dogs – didn’t expect that. And what’s more, it wasn’t even gratuitous; it was a key event that convinced Jess she couldn’t help Abby.

WHERE’S THE BACK UP? Why didn’t Becker take any of his boot boys along with him to the school? Did they all have the weekend off?

BEST LINES:
Abby: “Underneath it all, you’re actually quite nice.”
Lester: “Repeat that disgraceful slander and you’ll be hearing from my lawyers.”