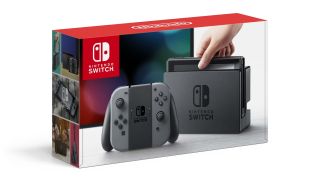 You watched the March 8 Nintendo Direct, right? Even if not, you could probably hear the chorus of cheers that arose when the company teased a new entry in the Super Smash Bros. franchise. Want to get hype but don't own a Switch of your own yet? Direct your attention to this eBay deal for 20% off a Nintendo Switch with gray Joy-Con controllers.

NOTE: the system itself has been listed at a range of prices throughout the day, but eBay itself is giving 20% off nearly everything, up to a maximum discount of $100, with the coupon code PSPRING20. As of writing, the Switch is listed at $319.99, but with the code that still brings it down to a reasonable $255.99. This deal is only good until 8pm Pacific on March 9, so hurry!

Nintendo Switch for $255.99, $44 off the standard price. Just choose Buy It Now and enter the code PSPRING20 to get 20% off this Switch model and save more than 40 bucks.

As I said, the code actually applies to just about anything, so don't think you're limited to the Switch console. Already got a Switch but need some games to play on it? Check out our list of the best Nintendo Switch games. Not much of a Nintendo fan and fancy yourself more of an Xbox or PlayStation gamer? We've got lists for the best Xbox One games and best PS4 games too.

However you want to do it, go forth and save.