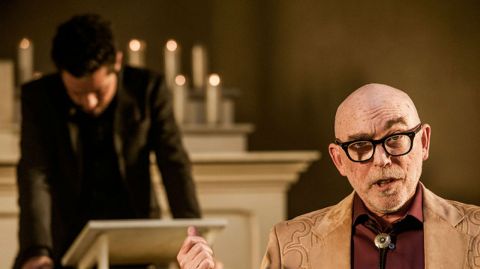 “Why?” asks a young woman in Jesse Custer’s congregation on the fateful day he promised to make God almighty appear at church. She wants to know why bad things happen to good people. Everyone in all of Annville, Texas is there to watch Jesse deliver on his word, from magnetic, terrifying meat man Odin Quincannon to the dueling high school mascots that have appeared sporadically over the course of the season because, I don’t know, they’re goofy? Preacher doesn’t make clear decisions. Anyway, the young woman doesn’t get a satisfying answer. After the supernatural service ends, Jesse and his friends Tulip and Cassidy walk out to go get french fries at a diner while everyone else in town tears the church apart having lost all faith. In the midst of the show’s inexplicable, unfunny, narratively incoherent nihilism, I can only conclude that the woman’s question was metacommentary. If this is the way the whole season was going to end, why did anything in the previous nine episodes happen at all?

Every plot thread, disparate as they were, is wrapped up this season with the sole exception of Eugene’s rescue from the netherworld. Odin Qunincannon’s quest for control of Jesse’s church, the rivalry between Jesse and Odin’s right hand man Donny, Tulip’s quest for revenge against her and Jesse’s former partner in crime, and even milquetoast Emily’s relationship with the mayor and her subsequent murder of the poor sap is given a clean cap here in Call and Response, episode ten of a meandering, sloppy season. Given the uneven pacing and tone of Preacher up to this point, it might seem impossible for all these disconnected threads to have a satisfying conclusion. It is. Even though everything’s wrapped up in a neat little bow to send Jesse, Tulip and Cassidy off together on a new quest, it couldn’t be less satisfying. The showrunners’ answer to the problem of how to give Annville’s citizens a season finale is to end them all in one fell swoop. The town and everyone in it besides the principals is literally blown up.

How and why this happens is only one event in Call and Response that seems inexplicable in light of last week. In episode nine, we left Jesse and Cassidy as they dug up angel limbs to use a magic phone with a direct line to heaven so Jesse can prove to his flock once and for all that God is real and has a plan. At the start of this episode, however, Cassidy is somehow in prison getting interrogated by Sheriff Root, who’s dead-set on finding his lost, arse-faced son Eugene. Jesse meanwhile is hiding out from the law in Donny the Bully’s house because Donny had some kind of religious epiphany off screen since episode eight and he no longer wants to destroy Jesse.

Finally, Tulip returns with old partner Carlos to ask Jesse to help her one last time and we learn finally just what he did that was so bad. Really, though Jesse and Tulip reconcile immediately after Carlos’ reveal and they beat the crap out of him together but don’t kill him. Which is what they could have done all along. All of these events don’t just feel like wasted time, they feel like back steps from the events of last week’s episodes. The only saving grace is that Jesse Custer has started behaving with confident consistency rather than as a sociopath but it’s far too little too late.

All of this takes place for no other reason than to clean up dangling threads and place Jesse with his closest compatriots in the church on Sunday, and they do indeed get there. For a brief moment in the middle of Call and Response, it feels like Preacher has finally settled into a consistent tone, something it can latch onto going into the second season. Mixing alienating absurdist humor with a grim setting and earnest characters that seemingly can do no good, there’s a balance in place as we see every character that appeared up to now in the crowd. The camera lingers on each and as Jesse starts the service only to be usurped by Odin Quincannon--Jackie Earle Hayley stealing one last big scene as the show’s best performer--all of the confusion and inexplicable story choices seem to be boiling to a specific point. When Jesse gets the phone to heaven working, that point seems clear and in sight.

The scene would have been an amazing centerpiece for, say, the second episode of a very different show. A ridiculous caricature of the Judeo-Christian god does appear on the line via heaven’s own FaceTime: Burning Bush edition and it looks like fire and brimstone is on the way for an awed crowd as Jesse and Tulip both start demanding answers to why life is what it is. When God responds to Jesse’s outburst by saying he has balls, it seems like Preacher’s even settling into its pitch black sense of humor for good. When Jesse realizes that this would-be psychopomp is less than he seems and uses Genesis, his power to command existence, to figure out what’s happening, Annville even seems to have a future as the permanent setting for the show.

For the first time, it seems like Preacher the show and Preacher the comic book have aligned fully in spirit. Jesse has revealed to his town that God has abandoned them and everyone else, including the wayward angels who’ve been stalking him all season and even the mysterious cowboy they pulled out of hell to get Genesis back from Jesse. After the false god shuts down the phone line and Jesse walks out while the crowd riots and Quincannon pulls down the cross behind the altar, I felt invigorated by where the show was going into the second season despite all the real, inexcusable flaws in the first. Where the comic was about a badass and his two best friends taking a road trip to track down the Creator of all things, the show was going to be an ensemble piece about a town trying to deal with an absentee deity while their chosen leader tries to find him. Different and poorly defined up to this point, but an intriguing set up with options from here on out.

And then Annville blows up in a fart cloud.

No, seriously. This is how Preacher’s first season ends. The people of Annville, losing all hope after the reveal that yes there is a heaven but God’s not there and no one there knows where he is either, come apart at the seams. Quincannon sits in his office clutching a doll of his dead daughter made out of ground chuck, a gang of girls murder the pedophile bus driver from episode three, and the goofy mascots hang themselves. Even Emily, who made such an out of nowhere turn towards darkness last week, explains to her kids that it doesn’t matter if there’s no God in heaven because being good for its own sake is all that matters. After all this, the show cuts to the methane energy processing plant beneath all of Annville, fueled by the liquid waste from Quincannon’s livestock, which is now overloading with pressure and venting gas all over town. Then a lit cigarette blows everything up. A lit fart cloud kills every single character from the show except Jesse, Tulip, Cassidy, the cowboy, and the angels. It is simultaneously the worst joke the show has made and a slap across the face of anyone who watched this summer.

What was the point of everything? The time spent with Emily? The hemming and hawing over Quincannon’s ideological war with Jesse and his history with Jesse’s father? How about Hugo Root’s relationship with poor Eugene? None of it meant anything. It built, literally, to a giant fart joke. The town explodes and Jesse, Cassidy, and Tulip sit in a diner eating fries and deciding to hunt down God to either help him if he’s in trouble or kick his ass if he isn’t, but they could have gotten to this place together by the end of episode two or three. The creative team spent ten hours spinning in circles, developing characters and exploring their lives, for nothing. Any goodwill left for the occasionally inspired scene setting and performances evaporates in a mushroom cloud that shows up in the background as Jesse and crew drive off into the horizon for a second season that will have nothing to do with what happened for most of the first. This is raw nihilism.

What’s most criminal about this is that even at its ugliest, the source material always had a moral compass. Jesse wanted to do right by the people he loves in addition to getting revenge--or at least answers--from the Almighty. It was about adventure and gross-out humor and friendship and gender; it was wonderful. Preacher the show is about nothing, and its season finale pats itself on the back for it. May the people of Annville rest in peace and Jesse Custer drive off never to return. Good riddance.