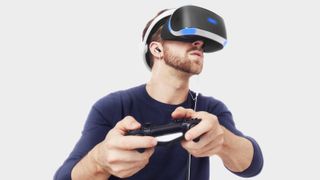 Sony has confirmed (via GamesIndustry.biz) that it will be shutting down PlayStation Manchester "as part of our efforts to improve efficiency and operational effectiveness."

Presumably, this means that the triple-A virtual reality game it was hiring for just weeks ago is now cancelled, though it's unclear whether PlayStation is planning to relocate the staff, and their work, elsewhere across the company, or can the project altogether.

New job listings on the PlayStation careers website have revealed that an "exciting new AAA PSVR game" is in the works at PlayStation Manchester, a fairly new first-party studio made up of "a small, highly experienced team who want to build great games to showcase this exciting new technology."

The developer is looking for programmers, artists, and world builders to bring this unannounced project to life, though it's unspecified whether the title is an entirely new IP, or a spin-off experience for an existing PlayStation franchise. Either way, there's potential that the game will be a PS5 exclusive, given that Sony's next gen console is less than a year away from release.

Indeed, previously discovered patents have seemingly indicated that a next-gen PSVR headset is already in the works for the PS5, while Sony itself has already confirmed that the existing models of its virtual reality devices will be compatible with the upcoming hardware.

Currently, only a few first-party AAA games are available on PS VR, ranging from the excellent Blood & Truth to the slightly less excellent PlayStation VR Worlds, but this news does suggest that Sony is continuing to invest in the platform with more fully fleshed virtual reality experiences that aren't just glorified tech demos for early adopters.

Given that PlayStation Manchester has only just ramped up its recruitment drive for this latest project, it's unlikely that we'll hear about it in official terms anytime soon, but - in better news - that PS5 reveal event is expected any day now, giving PlayStation fans plenty to look forward to in the meantime.