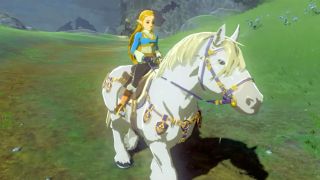 You've no doubt seen several The Legend of Zelda: Breath of the Wild mods by now. From turning the Master Cycle Zero into Sonic the Hedgehog to replacing Link's model with Linkle from Hyrule Warriors, there's seemingly no end to the creativity (and, let's be honest, a bit of madness) seen in the modding community. But one particular mod, as recently highlighted by Kotaku, deserves your attention: the Zelda Conversion Project.

The Zelda Conversion Project started simply, with the goal of replacing Link's model and animations with Princess Zelda's in The Legend Of Zelda: Breath of the Wild. It was spearheaded by modders WilianZilv and Skriller, but now has more than 20 contributors, coordinating their tasks via Discord and Google Spreadsheets. And now, instead of replacing Link's model and calling it a day, the team is completely reworking the game to accommodate the new protagonist.

Some of these tasks are relatively simple (changing text references from "Link" to "Zelda") while others require a great deal of work (creating wholly new models for equipment sets and modifying old sets to fit Zelda's feminine frame). I admit I'm particularly fond of the Zelda Conversion Project's version of the Snowquill and Flamebreaker armor sets:

There are also plans to re-dub cutscenes and tweak the story itself, since it wouldn't really make sense to hear Zelda drone on about being trapped and needing Link to rescue her in this scenario. Of all the tasks on the Zelda Conversion Project spreadsheet though, this seems to be the least developed. So hey, any voice actors reading this, feel free to audition!

I'm not usually one for mods or revisiting huge open-world games, but I admit that seeing the world of Breath of the Wild from a new perspective (with new armor, new story, and new voice work) would be enough to pull me back in.

Once the team is happy with the progress they've made, the mod will be available for the Cemu Wii U emulator. When that will be, however, is unknown. As one member of the team told Kotaku, "We plan on having an initial release really soon so it’s a bit of a secret."