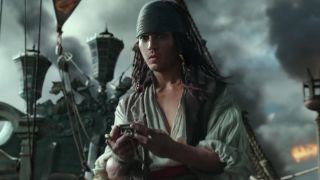 Want to see what Johnny Depp would have looked like if he joined the Pirates franchise when he was far younger? And would you care to see a glimpse of some ghost sharks in action? The newest trailer for Pirates of the Caribbean 5 has you covered on both fronts:

Along with the kind of swashbuckling action we’ve come to expect from this film series, the most notable thing here may be hidden in plain sight: it’s the text intercut with the footage that reads “The Final Adventure Begins.” That’s a clever way for Disney to hedge their bets with this film: if it earns mediocre money at the box office, they can put an end to this franchise right away and call it a day. But if it earns more than expected, they could continue the series with a sequel that links directly to this film, and if anyone asks, they can simply point to that line in the trailer and explain how this film is merely the beginning of Captain Jack Sparrow’s final adventure… and who knows how long they could stretch that out?

Pirates of the Caribbean 5 is called Pirates of the Caribbean: Dead Men Tell No Tales in the US, but I’ve heard rumors it could have the subtitle of “Salazar’s Revenge” when it is released in the UK. That title refers to Javier Bardem’s Captain Salazar, and this trailer’s opening scene gives us a pretty good idea about why he’d want revenge against Sparrow. Looks like Salazar has been tracking the shady scallywag for years, and Sparrow’s luck may have finally run out.

Directed by Joachim Rønning and Espen Sandberg, and starring Johnny Depp, Geoffrey Rush, Javier Bardem, and Kaya Scodelario, Pirates of the Caribbean 5 will be released in cinemas on May 26, 2017.