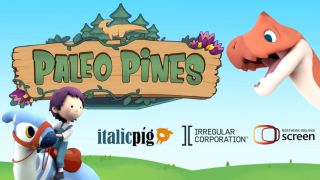 Paleo Pines, a life-sim in the vein of Animal Crossing and Harvest Moon, has been announced.

Irish game studio Italic Pig and Hardware Simulator publisher The Irregular Corporation's new game aims to erase the negative stigma around dinosaurs, and honestly, it's been like 60 million years since they ruled the world - it's about time we settle our differences.

The developers explain what you'll be doing in this dino-befrinder: "In Paleo Pines, players turn neglected meadows into bountiful dinosaur pastures and explore vast worlds. Players can tame and care for their new friends, befriend townsfolk, plant gardens, and encounter amazing creatures.

"Far from movie monsters, the dinosaurs in the game are adorably-stylised versions of real dinosaur species, and all of them are pettable, ridable, and lovable, which seems to be exactly what the social media audience is crying out for."

Paleo Pines is being partially funded by Northern Ireland Screen, a government-backed body promoting Northern Ireland's film, TV, and game industries. The agency's official page for the game says Paleo Pines was inspired by concept artist Jordan Bradley of Italic Pig, who took to Twitter to share concept drawings and wonder aloud, "I can’t be the only one who just wants to pet [a dinosaur] on the nose!"

Italic Pig and The Irregular Corporation hope to have Paleo Pines release by 2021, and only then will Bradley truly know whether she's the only one wanting to pet a dinosaur on the nose. What we do know right now is that those little dinosaurs sure are cute.

For now, take advantage of massive game discounts with our guide to the best Black Friday game deals.