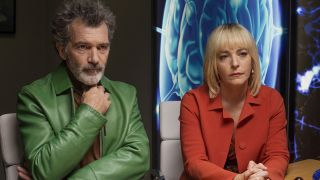 A Cannes staple since 1999’s All About My Mother, Pedro Almodóvar is back in competition this year with his most transparently autobiographical feature, the pensive and deeply personal Pain and Glory. Mining events previously presented through a warped mirror in 2004’s Bad Education and 1987’s Law Of Desire, Pain and Glory frequently feels like the summation of a life’s work. But it’s a film that covers too much familiar ground, in too comfortable a fashion, to trouble the very best of Almodovar’s celebrated CV.

The themes that have run through Almodóvar’s career like a rich seam of some rare mineral are reassuringly present in Pain and Glory – the unashamed celebration of (homo)sexuality, sensuality and an abiding love for women, particularly his mother – but the echoes of Almodóvar’s past are much more blatant than simple thematics. Central character Salvador Mallo (Antonio Banderas) is a middle-aged filmmaker with greying unkempt hair, a predilection for wearing shades inside and a wardrobe consisting almost entirely of primary coloured clothes. In other words, Banderas is playing a thinly veiled version of Almodóvar himself.

But unlike Almodóvar, Mallo has stepped away from filmmaking after suffering through a laundry list of chronic afflictions, exhaustively detailed during an early animated montage. One day Mallo is informed that the Spanish Cinematheque are planning to screen a restored print of Sabor, one of his less celebrated films from the ’80s. The Cinematheque wants Mallo to appear after the film for a live Q&A with the film’s star Alberto Crespo (Asier Etxeandia). The only problem: the pair had a falling out over the direction Crespo took the character, and haven’t spoken for 30 years.

After reuniting, the pair bury the hatchet when Crespo offers Mallo a puff of heroin for the first time. In short order Mallo becomes addicted to the blessed relief the drug offers for his chronic pain. Their rekindled friendship also reignites a creative spark between the two when Crespo finds a chapter from some long-abandoned autobiography, and implores Mallo to let him perform the piece as a one man stage show.

All the while, Mallo’s mind drifts in and out of reveries dating back to his childhood in rural Spain, where his mother Jacinta (Penélope Cruz) take cares of the young Salvador after his father moves the family to a new home literally carved out of the hills, like a cave system. It’s here that Salvador strikes up a friendship with a beautiful twentysomething handyman, providing a formative sexual awakening for the future filmmaker.

Get more from Total Film

For more coverage from Cannes 2019, be sure to follow Total Film. If you like what you see, don't forget that you can subscribe to Total Film magazine to get more like this delivered straight to your doorstep every month of the year.

These flashbacks are quintessential Almodóvar – a nostalgic reflection on a romanticised past where the simple power of attraction forever changes the course of a character’s life. They are, by a stretch, more compelling and evocative than the present day sequences, which plod along with technical precision in an exquisite whirlwind of colour, but never grip to the same degree. Certainly it feels like Almodóvar, after 30 years of drawing largely from the same well, has finally said everything he has to say with Pain and Glory.

Banderas is superb as Mallo, particularly in a centrepiece scene where a figure from his past returns to heartbreaking effect (albeit under serendipitous circumstances which stretch credulity). But the character spends too much of the film at a distance from the audience, emotionally numb from the pain, and then the painkilling effect of the heroin. It’s the young Mallo who earns our sympathy, the mystery being what contorted this wide-eyed innocent into the man he is to become.

For Almodóvar, it represents an unburdening, a decrypting of landmark experiences from his own life that were previously intertwined with other characters from across his career. In this regard it’s a fascinating addition to his oeuvre, and a film Pedro Almodóvar aficionados will find much to obsess over; Mallo’s apartment, for example, is said to be a recreation of Almodóvar’s own home. But there’s an awful lot of pain to go through to get to the glory.

For more Cannes 2019 coverage read our review of Ken Loach's latest Sorry We Missed You.