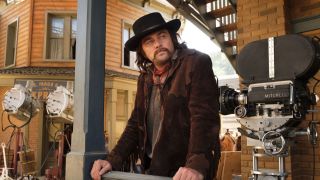 We might never get a chance to revisit the world of Once Upon a Time… in Hollywood, the dreamy, sun-kissed love letter to all things Tinseltown – but this is the next best thing. Director Quentin Tarantino has revealed what he thinks happened to Leonardo DiCaprio’s Rick Dalton after that fiery finale.

“Recently I’ve been imagining the career he had after the movie. And I’ve gotten really, really, super into it,” Tarantino told The Wrap, even revealing that he submitted a fictional filmography for Rick Dalton’s entire career to IMDb – which was rejected.

After Dalton helps fight off members of the Manson Family, he “starts becoming in demand again,” Tarantino begins. “I mean, not in demand like [They Shoot Horses, Don’t They? actor] Michael Sarrazin at that time was in demand, but he’s got some publicity and now all of a sudden The 14 Fists of McCluskey is playing more on Channel 5 during Combat Week and stuff. And so he gets offered a couple of features – low-budget ones, but studio ones.”

Dalton, though, remains a fixture on television in Tarantino’s dream scenario. “He’s getting good money and doing the best shows. And the episodes are all built around him. So as opposed to doing Land of the Giants and Bingo Martin, now he’s the bad guy on Mission: Impossible, and it’s his episode.”

Tarantino also reeled off a list of people Dalton worked with in that period - Glenn Ford, Vince Edwards, Paul Wendkos – which speaks to the director’s deep pool of knowledge of the period, as well as a lucrative career for DiCaprio's Dalton on the small screen.

He ends by re-affirming that he doesn’t fall back into the jittery mess we witnessed during Once Upon a Time in Hollywood. He’s got his mojo back, making a steady living, and, according to Tarantino, “he’s doing OK.”

From Pulp Fiction, to Django, and beyond, here are the best Quentin Tarantino movies, ranked!